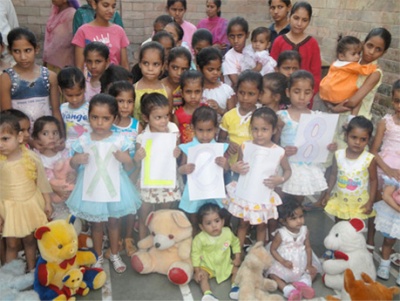 The woman behind the home is Prakash Kaur, who was herself left on the streets as a baby 60 years ago. Since 1993, she has dedicated her life to the noble but onerous mission of rescuing unwanted and unclaimed newborn girls and giving them a secure home and future. Today, Unique Home for Girls has 60-odd residents who call Prakash Kaur mother. “They are my own children,” the lady says. “They are never made to feel like abandoned children.”

As we walk around the home, it is easy to see that her claim is quite well-founded. Even as her ‘family’ expands and her responsibilities grow, Prakash Kaur’s fount of maternal compassion shows no signs of drying up.

She has touched the lives of many who’ve been cruelly shunned by their own. Siya was only a few hours old when she was found in a drain, wrapped in a black polythene bag. Reva was a newborn when her parents abandoned her near the highway off Kapurthala. Razia and Rabiya were just a few days old when they were discovered in the fields outside Jalandhar.

Safety and shelter for the Girls

These girls have all found shelter in Unique Home, where they now enjoy the real family experience that their pitiless parents chose to deprive them of simply because of their gender. The girls who live here range from the age of four days to 19 years.

Unique Home is run by a trust named after Bhai Ghanayya Ji, a disciple of Guru Gobind Singh. The trust aims to raise these children as healthy individuals and arm them with all the social skills and educational qualifications that they need to face life on their own terms. The girls could not have found a better person than Prakash Kaur for the job of providing them with support and succour.

Most of Unique Home’s inmates arrive here as hapless, barely alive foundlings who have no recollections of how they were brought here. But those that have grown up in the life-affirming warmth of this home are proud that they belong here. Under Prakash Kaur’s care and tutelage, these girls are all well adjusted individuals willing and able to take their rightful place in a society that still seems to harbour a strong aversion to children of their gender.

God helps those who help others

Prakash Kaur is acutely aware of the challenges that lie before her, but she has faith. “Yeh uparwaale ka kaam hai. Jab ussney yeh zimmedaari di hai to himmat bhi wohi dega. Jab aaj tak mujhe koi mushkil nahin aayee to aagey bhi nahin aayegi. Neki key kaam mein kabhi koi rukawat nahin aati,” - Translation - "This work is due to God's blessing. When He has given this responsibility, He will also give us the strength. I have not had any difficulty until now and I am confident we will not have any problems in the future also. In a noble and pure mission, one does not encounter any obstacles," she says.

Even though she is getting on in years, she still retains the strength to make chapatis for all the inmates of the home three times a day and seven days a week. 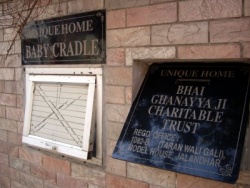 The Baby drop-off point where unwanted babies are dropped off anonymously.

The first thing that strikes one in Unique Home is a small hatched box near the entrance. It is called the “cradle”. Flip open the hatch and you see a shelf built into the wall. When a rescued child is placed on the shelf, it sets off an alarm that tells the staff that they have a new girl to take care of. When it comes to christening the new arrivals, names are drawn from all the religions of India. So at Unique Home, girls have Hindu, Muslim and Christian and Sikh names and faith has no restrictions.

Although we visited Unique Home without any prior notice, Prakash Kaur ensured that we were made to feel at home. Not surprising at all coming from a lady who has dedicated her life to dispelling a bit of the darkness that engulfs Punjab, indeed all of India. The girls brought to Unique Home grow up with a sense of belonging. This is the only home they know.

A home for 60-odd unique girls

For a home that houses 60-odd girls, the place looks a bit too small. The rather cramped space has limited amenities for the girls, including three small rooms that serve as bedroom, dining area and playroom, in addition to a small kitchen and an office for visitors. The room that is meant for infants has three big cradles. Each has four to five babies sleeping in them. Unique Home has now acquired a new site and expansion plans are in place.

But living space is the least of the home’s problems for the hearts here are big. This is like a huge family where the older girls take care of the younger ones. We are told by the founder that the girls go to good English medium schools like Saint Mary’s in Mussoorie. A few have since been married into suitable homes. But Prakash Kaur’s responsibility does not end there.

She continues to keep a watch over the girls even after they are married. She fights for their rights if the in-laws prove to be difficult. Take the case of former Unique Home inmate Alka. When her husband died prematurely, her in-laws grabbed all her property and threw her out of the house. Prakash Kaur intervened and fought tooth and nail. She eventually managed to secure for Alka her rightful share in the family property. So far Prakash Kaur has organised the marriages of 17 of the Unique Home inmates. While a few of these girls graduated from college before they got married, the remaining tied the knot after passing out of high school. However, several of the older girls here have decided not to marry and instead dedicate themselves, like Prakash Kaur, to the service of Unique Home.

April 24 is a very special day

April 24 is a very special day at Unique Home. It is the day when the children here collectively celebrate their birthday. A huge 100-kg cake is cut and the day is marked by much merriment. That apart, once every year, during the summer holidays, the inmates of Unique Home go on a trip to Darjeeling.

On our visit to the home, we ate lunch with the children. The food was simple but delicious: rice, chapatis and aloo gobhi. Prakash Kaur made fresh chapatis for all the 60 children.

“We don’t want to give our kids up for adoption. People come to us but we refuse,” says Prakash Kaur. Although she did not give us any specific details, she told us that she knows of many cases in which adopted girls have been ill treated.

Prakash Kaur herself has no idea who her parents were. She was found abandoned and grew up in a Nari Niketan. She describes the work she does today as “the lord’s work”.

Asked if she ever faced any mistreatment in the Nari Niketan where she grew up, she smiles and says: “I will never allow my daughters to work as maids anywhere.”

The most essential part of this home is that the children are aware of the fact that their real parents have abandoned them because they are obsessed with boys. But this poisonous truth has only strengthened their resolve to prove themselves. Sheeba, who studies in a convent school in Mussoorie, wants to be a successful neurosurgeon.

“I want my real mother to know that the daughter she threw out of her life is well established. I want to be very famous. I want to prove to her that girls are not a burden,” she says. Sheeba has always stood first in her class with A-plus grades. She is determined to make it to a good medical college.

Lucy is 19 years old. She wants to be a professor of English. “I believe that education is the only way forward in this society which discriminates against girl children,” she says.

The disease of gender discrimination

Punjab has one of India’s most skewed sex ratios. The percentage of women in the state’s population keeps dipping every year. A growing shortage of marriageable girls has forced men here to find partners in different cultures and states.

“When French President Nicolas Sarkozy and his wife Carla Bruni came to India, they prayed for a boy. I was shocked. I used to think that Westerners treat both genders equally. He could have asked for a girl. It would have sent out a message to the people of India. It’s rather sad,” says Prakash Kaur. The French first couple prayed for a son at the Fatehpur Sikri dargah of Sufi saint Salim Chishti.

Female foeticide is on the rise, especially among the educated class and in higher strata of society. It has assumed alarming proportions. According to NGOs working with issues related to women, every year, 10 lakh cases of female foeticide take place in the country with the help of gender determination tests. The death of young girls in India exceed those of young boys by over 300,000 each year and every 6th infant death is specifically due to gender discrimination.

According to Anjalee Shenoy of Sama Resource Centre for Women and Health, new techniques like PGD (pre-implant genetic diagnosis), a method that involves producing embryos through IVF, cannot just help you decide the gender of the child but the colour of skin and hair. And there is no effective law in place right now to stop this practice. “This falls under the Pre-conception and Pre-natal Diagnostic Techniques (Prohibition of Sex Selection) Act, 1994, but it is going undetected,” says Shenoy.

But there is hope yet. If only Prakash Kaur’s selfless spirit would rub off on society at large.