Truth is high but higher still is truthful living 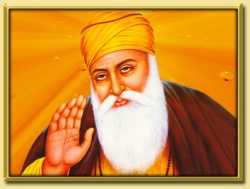 The quote above is an important saying of the founder of Sikhi, Guru Nanak, the first Sikh Guru. Most religions revere the Truth. Hinduism tells us that truth is ever triumphant. “Ye shall know the Truth and Truth shall make you free,” promises the Bible. Guru Nanak, too, reminds us that “Truth is the panacea of all ills,” and that “Truth is high but higher still is truthful living.” God's name, according to Sikhi is said to be the "Truth".

The Guru wants us to realise that God watches us all the time and that our lives are spent under His constant gaze. Just like a mother watches a small baby, the Lord watches us all. "He created all, and He Himself watches over us. Some are close to Him, and some are far away." (SGGS p 38) The way we behave in our life brings us near or takes us away! Only by following the path of truthfulness can one get nearer to the Lord.

So the Guru wants us to remember this and live a life of purity and truthfulness; only the ones who are endowed with these positive virtues will be accepted in His domain; all others with be rejected. "O Lord, in my mind I remain conscious of You; with my tongue I worship You, and with my eyes, I gaze upon You. (1)(Pause)" (SGGS p 500). Dwell on this and remember the Creator always!

The first Sikh Guru who was born in 1469 at Nankana sahib in present-day Pakistan. From an early age, he began his mission to change the world for a better place. He preached to all the peoples; to the whole world and is today recognised as an en-lightener of the conciousness of all the peoples of Earth. He travelled many thousands of miles from India to Mecca, to Turkey, Tibet, Sri Lanka, Bangladesh and many other countries and cities of the old world.

Has your life improved?

The lives of many thousands of peoples were changed for the better by the knowledge and spiritual wisdom imparted by this wise servant of God. With dedication, for nearly 7 decades, he promoted the message of peace and brotherhood, of equality and compassion, of justice and fairness, of service and prayer (simran), of devotion and of many other valuable traits of the purest human kind, which had been forgotten by most of the inhabitants of the world.

His birth marked the beginning of a sea-change in the behaviour that was to be expected of mankind. In the recent past, collective human consciousness had been reduced to a pretty low level. There was no justice in the world; the poor had to work as slaves; the weak were openly abused and exploited; misery could be seen everywhere. Many communities were engaged in constant battles and conflicts which resulted in the massacres of thousands of human lives. The was spiritual darkness everywhere.

The Guru resolved to turn things around and accordingly, he set very high moral goals for humanity. He preached in simple language which all could understand; and he set his message to music so it was easy to sing and remember. He provided the yardstick and an expectation for a better global community. He showed how all the human race was one and that our differences were immaterial in the eyes of God; and how we should live to please our Creator rather than to fulfil our urges. Now, the required level of behaviour and conduct from every individual had been lifted to a new height of purity and sincerity; a level which had not been seen on Earth for a very long time.

The Guru's message spelt the end of discrimination against women; the end of race and caste prejudices which had existed for millions of years; the end of the age of darkness, conflict, ignorance, animal-like instinctive behaviour of tension and a new beginning. Man was portrait as God's 'super species' who had to realise the huge potential that was locked within this unique body and to take on the responsibility befitting this 'master creation of God'.

The Guru taught the path of love and respect for all of God's creation; highlighted the need to work together as diverse individuals but with the same common primary aims; to live in harmony and understanding; to protect and promote the best that is possible in human values; to thank Almighty and remember Him at all times; to work hard and share the rewards received from God.

Before departing for his heavenly abode, Guru Nanak appointed Guru Angad as his successor. His teachings and those of his successors were preserved in writing, along with selected writings of many great men of other religions, in the Sikh holy book called the Guru Granth Sahib. The holy Granth provides spiritual guidance for all of mankind. Nowhere does it preach a message of division or exclusivity; all are treated equally; only the ones who perform good deeds and actions are praised while those who engage in negative action and wasteful deeds are warned.

Only the Good will rise

Today, when the people of the world are, all too often, engaged in the basest instincts; sleaze, deception, greed and even war, it is a good time to re-affirm the teachings of the great Gurus. The suffering of the world is bound to continue while the powerful leaders in positions of strength; heads of nations, corporations, institutions, etc., continue to move away from lives of honesty, truthfulness, compassion, humility and service.

The Guru Granth Sahib is the prime repertoire of the ethics taught by the Sikh Gurus. The Gurus show us the way to achieve a balanced and contended life through their words or Gurbani. Moral conduct or righteous behaviour is stressed at each and every step. The Gurus were men of vision and the Guru Granth is engrained with ethical and spiritual insights. The Gurus were perceptive and intuitive to the socio-natural habits and weaknesses of man.

Gurbani, (the message of the Gurus) asks us to wear the coat made of virtues - (Guna, sift, sheel - good qualities, merits, excellences) to think in a positive manner and practises deeds and carry out actions which are fair and beneficial to all. "As you plant, so shall you harvest. Without virtue, this human life passes away in vain." (SGGS p 56) Gun, Augun (bad deeds) and Vingun (without good deeds) have also been referred in Gurbani and the importance of avoiding them. Virtues in Sikhism is a quality that is vigorously promoted by Guru Nanak.

Path of self improvement

Truth, contentment, wisdom, meditation, kindness and forgiveness are some of the virtues that are held as important in the Sikh scriptures. The holy Granth says: "Those who have truth as their fast, contentment as their sacred shrine of pilgrimage, spiritual wisdom and meditation as their cleansing bath, kindness as their deity, and forgiveness as their chanting beads - they are the most excellent people." (SGGS p 1245) So it is up to the individual to arrange his or her life in such a way so that these virtues become part of their personality.

One thing that Sikhism teaches is that you don't have to renounce the world in order to be a religious person, you can enjoy life, be a house-holder, fulfil your obligations to family and society while pursuing the spiritual path to self improvement and enlightenment. Sikhi is a way of life and mode of living for most adherents rather than a commitment to specific rituals and activity for its own sake.