TRANSMIGRATION OF THE SOUL doctrine of rebirth based on the theory that an individual soul passes at death into a new body or new form of life. Central to the concept is the principle of universal causality; i.e. a person must receive reward or punishment if not here and now then in a subsequent birth, for his actions in the present one. The soul, it is held, does not cease with the physical body, but takes on a new birth in consequence of the person’s actions comprising thoughts, words and deeds. The cumulative effect of these determines his next existence. Attached to worldly objects, man will continue in the circuit of birth-death-rebirth until he attains spiritual liberation, annulling the effect of his past actions. 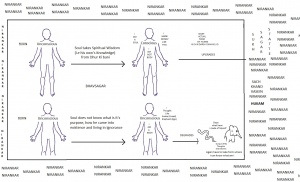 Belief in reincarnation is basic to the eschatology of all religions of Indian origin. Some Western philosophers of yore also believed in the transmigration of soul, but for them it was associated with the concept of the immortality of soul. In Indian tradition, on the other hand, transmigration is an essential concomitant of the doctrine of karma, according to which every action, physical or mental, has its own consequence which must be faced immediately or in future, either in this life or in the hereafter, good actions leading to a favourable reward and bad actions entailing punishment. The individual soul (jvatma), so it is believed, does not perish with the physical body but dons a new corporeal vesture in a new birth which is determined by its karma in the preceding births. Every new birth in its turn necessarily involves new karma or action leading to further consequences. Jivatma is thus tied to a karmik chakra or an endless cycle of birth-action-death-rebirth, until the chain is broken and karmik accumulation is dissipated and the jiva attains mukti or moksa, i.e. liberation or release from transmigration.

The origin of the idea of transmigration is traced back to the post-Vedic period. The early Aryans simply believed that good men ascended to heaven to join company with the gods while the souls of the wicked sank down into the abyss of hell. The postulate that there is no unmerited happiness and unmerited misery and that the individual soul takes after death a new existence during which it reaps what, good or bad, it had sown earlier was first propounded in the Satpatha Brahmana, one of the several commentaries that preceded the appearance of the Upanisads. Since then in India the highest spiritual goal has been the release of the jivatma from the cycle of birth and death or avagaman (lit. coming and going). Different traditions within the Indian religious systems offer different analyses and correspondingly different solutions. One view is that since transmigration is subject to karma or actions, the cycle can be broken only through the annihilation or karma. Various methods have been suggested to achieve this end such as renunciation, non-action, ritualism and gian (jnana) or philosophical and metaphysical knowledge.

The doctrines of transmigration of soul and karma are accepted in the Sikh system, but with significant individual shades and emphases. Karma, it is true, determines its own consequence: jehe karma kamai teha hoisi—as one acts so shall one be (GG, 730). However, karma as part of the Divine Order (hukam) is a natural compulsion and hence is unavoidable. What is needed, therefore, is not annihilation of karma through non-action, but doing good deeds and avoiding evil ones. Men are naturally endowed with power to discriminate between good and evil. Human life is on this account a valuable chance not to be frittered away.

Guru Nanak warns: suni suni sikh hamari sukritu kita rahasi mere jiare bahuri na avai vari — Listen, listen to my advice, O my Mind! Only good deeds shall endure, and there may not be another chance (GG, 154). Says Guru Arjan: “milu jagadis milan ki baria chirankal ih deh sanjaria — do meet the Lord of the Universe, for now is the time. After ages (passing through many different forms) have you attained the gift of human life” (GG, 176). Here in the world man has the opportunity to achieve ethical perfection, cherish the Lord and earn final release.

Secondly, what lies at the root of the problem is not karma, but haumai, i.e. egoity or the sense of I-ness. Jivatma (individual soul) is a spark or ray of the Ineffable Spirit, Paramatma, and its deliverance lies in its reunion with its source. What hinders such reunion is the jiva’s egoism. The jiva confined in its narrow shell and devoid of understanding of the infiniteness of Reality claims for itself a separate, individuated existence. It is haumai that robs a jiva’s karma or potential merit. Even the holiest of acts would not avail when accompanied by haumai or self-conceit. Says Guru Arjan, Nanak V: “jo jo karam kie hau haumai te te bhae ajae — All actions performed in ego go waste,” (GG, 999) and “apas kau karamvantu kahavai, janami marai bahu joni bhramavai — As long as he (jiva) thinks he is the doer, so long shall he continue wandering through wombs and births” (GG, 278). What is needed is not annihilation of karma, but the conquest of haumai. This is done through right understanding of hukam (Divine Order), and the sabad (Divine Word) itself. As says Guru Amar Das, Nanak III, “ham kia ham karahage ham murakh gavar karnaivala visaria dujai bhai piaru — Utterly misguided are they who, filled with ego lay out many claims for what has been done and for what remains to be done, forgetting the one who guides all of our actions, and falling a prey to illusion and duality” (GG, 39). When haumai is overcome and actions are dedicated to God, individuation ceases and the soul merges into the Absolute Beings.

Another Sikh principle having bearing on the concept of transmigration is that of nadar. Divine Order (hukam) although generally immutable is yet tempered by nadar or Divine Grace. The law of transmigration of soul, too, does not condemn a soul to irrevocable predestination and eternal karmik chakra. God’s nadar (literally favourable glance) can at any stage redeem a soul and release it forever from the circuit of avagaman or transmigration. Mukti or deliverance from the bondage of birth and death, according to Sikh belief, is not contingent upon the end to the present life. With God’s grace one can be a jivan-mukta, emancipated while still living. What is required of the seeker of nadar is to behave and act in such a way that he qualifies himself for His grace. Thus while karma is necessary and good deeds helpful, liberation finally comes through nadar. Says Guru Nanak in the Japji, “karmi avai kapra nadari mokhu duaru — body is determined by karma, but through nadar is found the door to liberation” (GG, 2).

There is nothing dreadful as such about birth and death', i.e. transmigration, although to transcend the cycle is ever the soul’s goal. Birth and death are part of hukam and are to be accepted as His raza or Will. Guru Nanak says: “jammanu marna hukamu pachhanu — know that birth and death are by His hukam alone,” (GG, 412). Again, “jammanu marana hukamu hai bhanai avai jai — birth and death are by His hukam; by His Will does one come and go” (GG, 472). Besides being in tune with the Divine Will and practising humility and truth, the jiva is urged, in Sikhism, to take shelter in naam or shabad. Without savouring nam one wanders endlessly from birth to birth. Says Guru Nanak “gur kau jani na janai kia tisu chaju acharu andhulai namu visaria manmukhi andh gubaru avanu janu na chukai mari janamai hoi kahuaru — They who have not cherished the Guru nor realized nam will continue to transmigrate” (GG, 19).

Above adapted from article By K. T. Lalwani of Global Sikh Studies