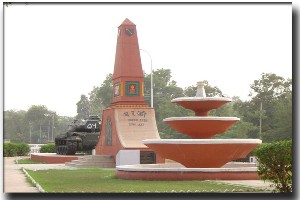 The Barki Memorial was constructed in 1969 to perpetuate the memory of the soldiers of the 7 Infantry Division who made the Supreme sacrifice on the battle field in 1965 and paved the way for the fall of Barki a town situated at a distance of 15 miles South East of Lahore. The foundation stone of this memorial was laid by Lt Gen Harbakhsh Singh VC on September 11,1969 and unveiling ceremony was performed by Lt Gen HK Sibal MVC. The memorial which now forms a part of Saragarhi Complex has a pillar in the centre, a captured Pakistani M47 Patton tank with a Barki mile stone on the south and a water fountain on the North.

The pillar is 27 feet high and is of red and white sand stone and gneise. The mouldings and relief carvings are in the classical Indian architectural style. The fountain denotes symbolically that the memory of those who laid down their lives will for ever remain green and lush by an abundant spray of water.