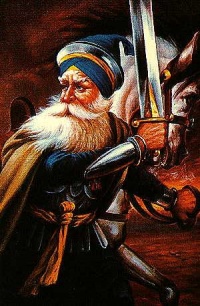 BABA DEEP SINGH SHAHID (1682-1757) is one of most honoured martyrs in Sikh history and the founder of the Shahid Misl as well as of the Damdami Taksal. He was tall, strong, and uncommonly brave Sikh who was a bold and fearless saint-soldier, ever ready to risk his life for the Panth.

Last Week's Featured article: Message of Guru Granth Sahib On September 1, the Sikhs will celebrate 401 years of the first installation of their holy scriptures called the Sri Guru Granth Sahib. The Sri Guru Granth Sahib was compiled and installed at Harimandir Sahib in Amritsar in 1604. The holy book contains hymns written by saints and scholars of different religions. The SGGS contains message for the whole of humanity. Continued .....


Previous Featured article: Battle of Saragarhi On September 12, the Sikhs will remember with honor the supreme sacrifice of their 21 comrades who for the security and safeguard of their country and fellow citizens willingly laid down their lives. These soldiers were inspired by the heart piercing message of their tenth Guru, Guru Gobind Singh. Continued .....