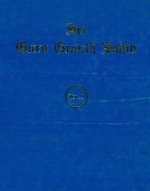 Dr Gopal Singh was responsible for completing the first complete translation of the Sri Guru Granth Sahib into English in 1960. It believed that initially it was published in 2 volumes although the present publications are published in a four volume set.

As the first English translation, it was very welcomed by non-Punjabi readers and received a wide distribution. The 'International Edition' published by the World Sikh University Press in 1978, has a light blue cover.

Dr. Gopal Singh's stellar reputation for scholarly work in service of the Dharma is well deserved. In fact, the introduction to the work, in the first of the four volumes, is a remarkable work in itself. Especially readable and worthwhile is Section II: On the Philosophy of Sikh Religion.

In this treatise on comparative religion, he traces the common threads of religious thought throughout the ages, giving one a deeper appreciation of Sikh Dharma. His brief explanation of the Kundalini and Yogic traditions is well-done. .....More