From SikhiWiki
Jump to: navigation, search
Lions of the Great Wars 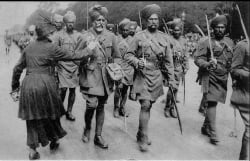 With the outbreak of war in Europe, India, the Crown Jewel of the British Empire, joined the Allies in battle on the 4th of August 1914.

Contributing the most volunteers of any of the British imperial holdings that fought in the war, India produced between 900,000 to 1.5 million troops for combat by 1919.

Of these troops, the Sikhs, one of the two loyal 'martial races' of the British Raj, rallied in enormous numbers for the King, Empire, and the defence of Europe.

At the beginning of the war, Sikh military personnel numbered around 35,000 men of the 161,000 troops of the Indian Army, around 22% of the armed forces, yet the Sikhs only made up less than 2% of the total Indian population. By the end of the war 100,000 Sikh volunteers joined the British Armed forces with a few Sikhs also contributing to the French Air Service and the American Expeditionary Force. .....More