From SikhiWiki
Jump to navigationJump to search
Village of Children 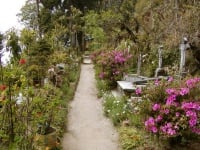 Village of Children Something about the village graveyard set it apart. During my travels I had seen literally hundreds of graveyards. Usually graveyards are somber and somewhat resigned under the weight of death. But this one was different: besides been well-kept - which in itself was not unusual - it was designed more like a garden of life than a cradle of death.

What set it truly apart was the cheerfulness of its structure. Its' shady trees and sunny flowers seductively invited me in. Graveyards were my favourite resting places. It seemed that as soon as one exited a womb, Maya (worldy attractions) became a human's sole companion until the gates of a graveyard. Perhaps it was the absence of Maya in such places that kept my hopes of enlightenment alive.

I had left home when I had turned twenty. Although I didn't know it then, I had set out to find a place free of illusions. I had travelled to majestic temples, sober ashrams, holy rivers, renowned sadhus and any other religious place I had been told about, yet my mind was as restless as it was when I had first started. The holy places and the holy people at these places were among the most devout followers of Maya. .....More