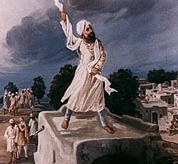 Makhan Shah Labana (Punjabi: ਮੱਖਣ ਸ਼ਾਹ ਲਬਾਣਾ), was born on 7 July, 1619. He was a devout Sikh and a rich trader from Tanda district, Jhelum (now in Pakistan). He is called "The discoverer of the ninth Nanak" for his famous act of finding the ninth Sikh Guru, Guru Tegh Bahadur in Bakala, India in around 1665. The Sakhi (true story) of that discovery was recorded in "Janamsakhis" and has been told as a story among the Sikhs for many generations.

Baba Makhan Shah was born to Mata Vijey Devi. His father was named Bhai Dasa. He was born on 23 Ashad 1676 Bikarami, which translates to 7th July, 1619. Macallife, Teja Singh, Ganda Singh and Colonel Gurcharan Singh support this date; however the historical record of Makhan Shah is not complete.

He got his basic education from Vijaynagar. He was a master in Sanskrit language and also learned many foreign languages including Portuguese and English, which were picked up during his sea travels as a trader. He was not a good speaker of Punjabi; Lubanki was his mother tongue and that is why when he found Guru Tegh Bahadur he shouted GURU LADHO RAE (which means "Found the Guru" in Lubanki.) .....More