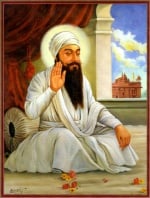 On the 2 May every year, the Sikhs celebrate the birthday of their spiritual master, Guru Arjan Dev, the fifth Guru of the Sikhs. Guru ji was the embodiment of Godly devotion, Selfless Service and Universal Love. He was the treasure of celestial knowledge and spiritual excellence.

He substantially contributed towards the welfare of society and the formation of the Sikh faith. He stood steadfastly for the principles he believed in, even sacrificed his own life, and attained a unique and unparalleled martyrdom in the history of mankind.

Guru Ji was born on May 2, 1563, in the house of Guru Ram Das, the fourth Guru of the Sikhs. He was the youngest of the three sons of the fourth Sikh Guru. Guru Ram Das envisioned heavenly qualities in his youngest son Arjan.

From childhood Guru Ram Das found him imbued with Naam, the remembrance, love and affinity with God and always immersed in tranquil bliss. The Guruship was destined to be bestowed upon Guru Arjan. It is said that one day, baby Arjan crawled up on the Divine throne of his maternal grandfather, Guru Amar Das the third Guru, and sat there comfortably. The Guru smiled and prophesied, “Maternal Grandson will ship the Naam across.”

Although he ascended the throne of Guru Nanak at a young age of 18, he was far more advanced in wisdom and spiritual understanding than his tender age. The letters he wrote to his father from Lahore, not then even a teen-aged boy, stand testimony to this fact (see Shabad Hazaray}. .....More