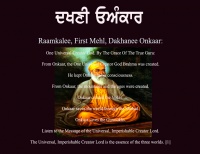 Dakhni Oankar or simply Oankar is a composition of 54 stanzas by the founder of Sikhism, Guru Nanak's in the measure Raag Ramkali in the Guru Granth Sahib. The full title of the bani is Ramkali Mahala 1 Dakhani Oankaru.

The composition appears in the holy Granth at pages 929 to 938. The title is explained differently by different scholars. The word "Dakhan" means "south" and "Oankar" is a reference to "The Creator".

For example, 'j' is used for 'y' and 'b' for 'v'. "Oankar" opens with verses in praise of God who is remembered as the creator of all that exists; of time with all its different cycles; and of the entire universe. Then follows the verse of rahau (pause) indicating the central theme of the bani: "0 Pandit, why are you involved in the writing of such idle hieroglyphics - write the name of God alone."

After this begins the acrostic form. The emphasis is on ethical and spiritual teaching. .....More