From SikhiWiki
Jump to navigationJump to search
Guru Har Gobind 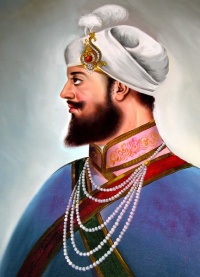 Mata Ganga asked her husband Guru Arjan for the gift of a son, for he had granted the wishes of so many Sikhs, surely he would answer hers as well. Guru Arjan told Mata Ganga to go and seek Baba Budha’s blessing. Mata Ganga got her helpers to prepare a huge amount of lavish food and took a large procession on chariot to see Baba Budha. When Mata Ji asked Baba Ji’s for his blessing, Baba Ji replied that he was a simple grass cutter and didn’t have such noble ability. Mata Ji left the scene disappointed. On her return, she narrated the events to her husband. Guru Arjan explained that if she wanted blessings, she should have gone to see Baba ji on foot; in a small group; and she should have lovingly cooked a simple meal herself.

She did exactly that the next day. Obviously, Baba ji was very pleased. He took hold of an onion in his left palm and said; “Your son will be the Master of Masters, he will be the King of his people and he will break the rule of the tyrants as I break this onion under my fist.” - smash!!

At the age of 11, young Guru Har Gobind was nominated by his father, Guru Arjan as the next Guru. The Sikhs celebrate this auspicious day, every year, on July 5th. Before Guru Arjan depart from this earth, he sent a message to his son;

“Let him sit fully armed on the throne and maintain an army to the best of his ability” .....More