From SikhiWiki
Jump to navigationJump to search
Saka Nankana Sahib 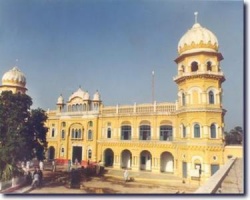 On February 21, the Sikh sangat worldwide will remember the sacrifices made during Saka Nankana Sahib. This event forms a very important part of Sikh history.

In political significance, it comes next only to Jallianwala Bagh massacre of April 1919. The saka (demonstration or agitation) constitutes the core of the Gurdwara Reform Movement started by the Sikhs in early twentieth century. The interesting part of this saka is the unprecedented discipline, self-control and exemplary patience displayed by the peaceful Sikh protesters even in the face of extreme barbarism.

Even the national leaders like Mahatama Gandhi had to acknowledge in no ambiguous terms the glory and the prestige which the peaceful and passive resistance of the Sikhs had brought to the India's struggle for freedom.

In October 1920 A.D., a large meeting was held at Dharowal, District Sheikhupura for the reform of Gurdwara Nankana Sahib. At this meeting, the leaders of the event revealed to the large gathering of Sangat, that great misdeeds were being committed inside the Gurdwara by the Mahant who was managing the holy shrine.

Gurdwara Nankana Sahib was highly revered as it was the birth place of Guru Nanak; a city named Nankana Sahib grew up around the Gurdwara which is now in Pakistan. At meeting, it was unanimously resolved that the Mahant be asked to mend his ways. .....More