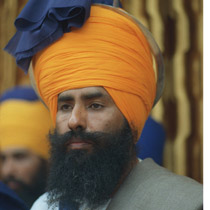 Jathedar Talwinder Singh (February 26, 1944 - October 15, 1992) was born at village Panchhat (tehsil Phagwara, district Kapurthala). After passing his matriculation examination from the village school, he started cultivating his land. In 1970, he migrated to Canada. After getting Amrit, Jathedar Talwinder Singh started missionary activities. His first act was to stop the sale of Guru Granth Sahib as an ordinary book in Canada. Later, he undertook the mission of elimination of un-Sikh like practices from the Gurdwaras in Canada. He, along with his friends, had to struggle hard to stop the entry of bare-headed people into the worship halls of the Gurdwaras.

After the killing 13 Sikhs, by the Nirankari cult, at Amritsar, on April 13, 1978, he went to Punjab and organized the Sikh youth. His organization punished those who were guilty of blasphemy and sacrilege of the Sikh shrines and/or leaders of anti-Sikh Mafia gangs. For some months the Government could not know anything about the organization. In November 1981, the Government was able to identify the leaders of the organization. Jathedar Talwinder escaped arrest. In 1982, he returned to Canada via Nepal and Thailand. He continued his activities in the Western Hemisphere. As a result of conspiracy of one of his colleagues (Satnam Singh Babbar of Germany), he was arrested on June 29, 1983, while entering Germany. He had to undergo a hunger strike to win his right to turban and vegetarian meals in Düsseldorf jail (Germany). In June 1984, he was released unconditionally. He was arrested again, in Canada, in November 1985, in connection with the blasting of an Indian airliner. In Canada as well he was acquitted in April 1986. He was arrested again, in May 1986. He remained in jail till April 14, 1987. He had to undergo hunger strike again for right to vegetarian meals. After some time he left Canada to join the Sikh army. He participated in several expedition and actions. In October 1992, he was arrested at Jammu and was mercilessly tortured. He was killed in a fake encounter, on October 15, 1992 at village Kang Araian (district Jullundur).

In July 2007, the investigative magazine Tehelka reported that Parmar may have confessed to the Punjab police during interrogations preceding his death. He is said to have supplied the dynamite to Lakbir Singh Rode, who was claimed to have been the mastermind behind the bombing of Air India Flight 182.

Alleged Confession to Punjab Police in 1992

In July 2007 the investigative newsmagazine Tehelka reported that Parmar had been interrogated in India between October 9 and 14, 1992, by senior police officers, where he revealed that the Air India 182 blasts were instigated by Lakhbir Singh Brar Rode, a nephew of Jarnail Singh Bhindranwale. The article also states that Lakhbir may have been an Indian agent, which is why the confession was officially destroyed[1].

Recently, retired Punjab Police DSP Harmail Singh Chandi, the key official behind Parmar's arrest at Jammu in September 1992, and his subsequent interrogation before he was killed, has come forward with audiotapes and statements from Parmar's confessions. Despite being ordered to destroy these records, he had apparently preserved them in secret. The confession apparently outlines many details of the plot:

"Around May 1985, a functionary of the International Sikh Youth Federation came to me and introduced himself as Lakhbir Singh and asked me for help in conducting some violent activities to express the resentment of the Sikhs. I told him to come after a few days so that I could arrange for dynamite and battery etc. He told me that he would first like to see a trial of the blast...After about four days, Lakhbir Singh and another youth, Inderjit Singh Reyat, both came to me. We went into the jungle (of British Columbia). There we joined a dynamite stick with a battery and triggered off a blast. Lakhbir and Inderjit, even at that time, had in their minds a plan to blast an aeroplane. I was not too keen on this plan but agreed to arrange for the dynamite sticks. Inderjit wanted to use for this purpose a transistor fitted with a battery...That very day, they took dynamite sticks from me and left.

Then Lakhbir Singh, Inderjit Singh and their accomplice, Manjit Singh, made a plan to plant bombs in an Air India (AI) plane leaving from Toronto via London for Delhi and another flight that was to leave Tokyo for Bangkok. Lakhbir Singh got the seat booking done from Vancouver to Tokyo and then onwards to Bangkok, while Manjit Singh got it done from Vancouver to Toronto and then from Toronto to Delhi. Inderjit prepared the bags for the flights, which were loaded with dynamite bombs fitted with a battery and transistor. They decided that the suitcases will be booked but they themselves will not travel by the same flights although they will take the boarding passes. After preparing these bombs, the plan was ready for execution by June 21 or 22, 1985. However, the bomb to be kept in the flight from Tokyo to Delhi via Bangkok exploded at the Narita airport on the conveyor belt. The second suitcase that was loaded on the Toronto-Delhi ai flight exploded in the air." - from alleged confession by Talwinder Singh Parmar

After this interrogation, Parmar was shown as having been killed in an exchange of fire between police and six militants in the wee hours of 1992-10-15, near village Kang Arian in Phillar sub-division. However, Tehelka claims that actually, Parmar had been killed while in custody. It cites discrepancies between the First Information Report (FIR) regarding the incident, and the post-mortem report. According to the FIR, Parmar was killed by AK-47 fire by SSP Satish K Sharma, firing from a rooftop, at 5:30 AM. The PMR shows that the line of fire of the three bullets are different, which is not possible if one person is firing from a fixed position. Also, the PMR says that the time of death was between 12am and 2am.

The tapes and statements are claimed to have been handed over to the Royal Canadian Mounted Police (RCMP) and the John Major Commission of Inquiry that is reinvestigating the Kanishka blast. This was made possible through the efforts of the Punjab Human Rights Organisation (PHRO), a Chandigarh-based NGO that conducted interviews of Parmar's associates and prepared a comprehensive report over seven years.

Tehelka reports that "the PHRO's Principal Investigator Sarbjit Singh and lawyer Rajvinder Singh Bains flew to Canada along with Harmail in June and produced their findings before the Commission's counsels". Official inquiry spokesman Michael Tansey told the The Globe and Mail: "We're aware of this article in Tehelka, and we will explore this and any other allegations when the hearings resume in the fall."

Meanwhile, Lakhbir Singh Rode, who is the head of the banned International Sikh Youth Federation, is now alleged to be living in Lahore