Maanyog Hari Singh Ji, Your article is of immence heriatage value.I suggest a minor change in amage of map of shrine.In my opinion it shoud be rotated by 90 degree as shown right. 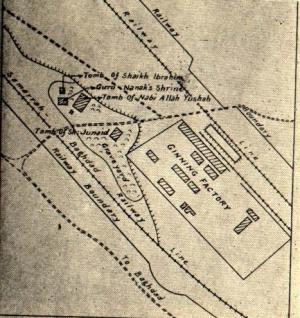 With rotated view the directions match with indicated in the article ; and also then these match with location picture(1and 1/2 mile from station and 1 mile on right of river near cotton ginning mill)of the site map marked by me in Baghdad satellite image as shown in link below

Damges to Shrine site in Iraq war during 2003

Satellite image appears to confirm damges to shrine site.In subsequent rebuild of site there appears to be no effort for restoration of such a heritge value site.Although world heritage status might not have been accorded to site,but it is very well a sikh heriatge site with well documented evidences.Some sikh institutions should make all out efforts to get site restored from damges of war crime.For this help of President of America should also be sought.Editors of sikhiwiki and administrtors of sikhnet can play a vital role to make public aware about this.--Guglani 21:15, 10 December 2006 (MST)

However according to some reports of april 2003 there are no apparent damages to gurdwara.See report below from Shyam Bahtia of rediff.com:

Two shells from an American tank narrowly missed a shrine dedicated to Guru Nanak in the suburbs of north Baghdad last week.

The spent shells are lying 10 metres away from the shrine, founded in memory of Guru Nanak's visit to Baghdad, en route to Mecca, in 1520.

Although the shrine is intact, the force of the two blasts has shattered the windows overlooking a courtyard dedicated to a famous Shia, Sheikh Bahloul, who was befriended by Imam Ali Ibn Mousa several hundred years ago.

"Then to Baghdad did Baba Nanak go and outside the city made his abode," says an inscription on the wall, erected on the 500th birth anniversary of Guru Nanak on November 23, 1969.

The caretaker of the shrine, Mohammed Abdul Razak, 40, says he was not present when US forces in the area were battling loyalists of Saddam Hussein last Saturday.

"I'm glad I was not here. If you go outside you can still see the tank treads on the road."

Razak says members of the Indian community were regular Friday morning visitors to the shrine until the war started. Since then nobody has come.

The Indian embassy and the ambassador's residence, a short distance away by car, have fared slightly better.

Last week armed men raided the Rafidain Bank on the same street as the chancery and the ambassador's residence.

Hadi Saleh, 40, the son of the caretaker, told rediff.com: "They came here as well, but we soon got rid of them.

"They were all thieves. One of them stood outside and wanted to talk to me. I told him, 'I don't know you.'"

Gurdwara repair will have to wait Amarinder gets reply from Blackwill(U.S. ambassador to india) New Delhi, May 6 The repair and reconstruction of the historic gurdwara in Iraq will have to wait till a proper administrative set-up is in place in the war-ravaged country. (Extract from tribune report of 7.05.2003)