Surjit Singh Barnala (born October 21, 1925) is the present governor of Tamil Nadu, India. He has held that position since November 2004, and has had a long career in Indian politics, during which he was Chief Minister of Punjab, elected to the Lok Sabha, and a vice-Presidential candidate. 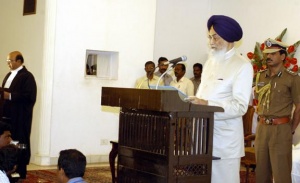 Barnala was born in Ateli village, which was then part of Nabha, Punjab state, but is now part of Haryana. Born of a well-to-do family (his father was a magistrate), Barnala passed Law from Lucknow University in 1946. In Lucknow, he was involved in the Quit India Movement of 1942. Subsequently he practised law for some years, and became politically active in the late '60s, rising through the ranks of Akali Dal. Though, he first stood for election in 1952 but lost by a meager 4 votes.

Barnala served as chief minister of Punjab from September 29, 1985 until May 11, 1987. Barnala, a Sikh and a member of the Sikh political party Shiromani Akali Dal served as chief minister at a difficult time, this was a period of terrorism in Punjab. The state had been under president's rule from 1983 to 1985, and after nearly two years in office, Barnala was forced out and the state was put under president's rule for another three years.

In 1997, Barnala was a candidate to be the vice-president of India but was defeated in Parliament by Krishan Kant. Observers said, Barnala in spite of being a candidate of the opposition got an additional support of at least 45-50 members of the ruling United Front and Congress.

Barnala was elected to the Indian Parliament thrice. In 1977 he served as Food, Agriculture & Rural Development minister and in 1998 as Chemical & Fertilizers, Food & Consumer Affairs minister in the Government of India. He is known for his passiveness and honesty.

He has authored a book "Story of an Escape" which has been translated in several languages. Painting is his hobby and four exhibitions of his works have been held. The proceeds from his recent exhibitions went to charity.