Sohni Mahiwal is one of the four popular tragic romances of the Sindh. The other three are Heer Ranjha, Shah Abdul Latif Bhittai and Sassi Punnun.

Sohni was the daughter of a potter named Tula, who lived in the Punjab near the banks of the Sindhu. As soon as the 'Surahis' (water pitchers) and mugs came off the wheels, she would draw floral designs on them and transform them into masterpieces of art. 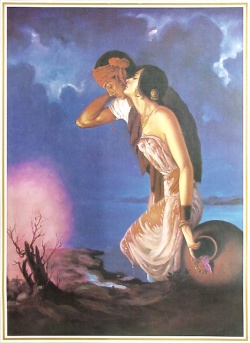 Izzat Biag, the rich trader from Bukhara (Uzbekistan), came to India on business but when he saw the beautiful Sohni, he was completely enchanted. Instead of keeping 'mohars' (gold coins) in his pockets, he roamed around with his pockets full of love. Just to get a glimpse of Sohni, he would end up buying the water pitchers and mugs everyday.

Sohni lost her heart to Izzat Baig. Instead of making floral designs on earthenware, she started building castles of love in her dreams. Izzat Baig sent off his companions to Bukhara. He took up the job of a servant in the house of Tula, Sohni's father. He would even take their buffaloes for grazing. Soon, he came to be known as "Mahiwal"(buffalo herder).

When the people started spreading rumours about the love of Sohni and Mahiwal, without her consent her parents arranged her marriage with another potter.

Suddenly, one day his "barat" (marriage party) arrived at the threshold of her house. Sohni was helpless and in a poignant state. Her parents bundled her off in the doli (palanquin), but they could not pack off her love in any doli (box).

Izzat Baig renounced the world and started living like a "faqir" (hermit) in a small hut across the river. The earth of Sohni’s land was like a dargah (shrine) for him. He had forgotten his own land, his own people and his world. Taking advantage of the darkness of the night, when the world was fast asleep, Sohni would come by the riverside and Izzat Baig would swim across the river to meet her. He would regularly roast a fish and bring it for her. It is said that once, when due to high tide he could not catch a fish, Mahiwal cut a piece of his thigh and roasted it. Seeing the bandage on his thigh, Sohni opened it, saw the wound and cried. 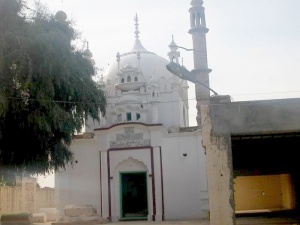 From the next day, Sohni started swimming across the river with the help of an earthen pitcher as Izzat Baig was so badly wounded and could not swim across the river. Soon, the rumours of their romantic rendezvous spread. One-day Sohni’s sister-in-law followed her and saw the hiding place where Sohni used to keep her earthen pitcher among the bushes. The next day, the sister-in-law removed the hard baked pitcher and replaced it with an unbaked one. That night, when Sohni tried to cross the river with the help of the pitcher, it dissolved in the water and Sohni was drowned. From the other side of the river, Mahiwal saw Sohni drowning and jumped into the river and drowned as well. 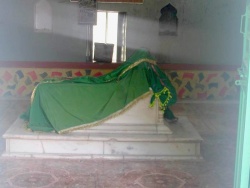 Mazhar Of Sohni at Shdadpur

The Tomb Of Sohni In Shahdapur City Sindh, which is 75 km from (Hyderabad). According to the legend the bodies of Sohni Mahiwal were recovered from river Indus near Shahdapur and hence are buried there.

An Indian bollywood film was also made with the name Sohni-Mahiwal(1984) starring Sunny Deol and Poonam Dhillon.