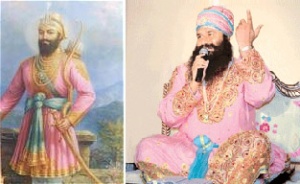 According to the Dera Sacha Sauda website, the organisation is not a religion, a caste, an organisation, a party or a name of any building. Then one wonders what it is? The site goes on to say that the meaning of Sacha Sauda is, "to truly meditate on the name of the infinite creator of all whether known as Allah, Ram, God or VaheGuru without interfering in anyones religion or caste".

It is no surprise that they have borrowed the title of one of Guru Nanak's earliest adventures Sacha Souda from his early life to confuse and mislead the masses. Why choose the name of an important Sikh historical shrine and a story straight from the Janamsakhis to give a name to a organisation claiming iself not related to Sikhi or any religion. Why use the name Gurmit, Rahim (one of the names of Allah), Ram (often used to refer to God in Hinduism) and the name Singh unless one is purposefully intending to strike a chord in the heart and soul of these religions' adherants?

The site makes many promises by posing questions such as: Do you want spiritual peace? Do you wish physical, mental peace and happiness? It then says that this can all be achieved by, "...the wealth of NAAM (holy word / often used in the Bani of Sikhs) from a perfect Master Saint and following it thoroughly."

Our Guru tells us:

Although they don't call themselves an organisation, it is clear that they are an organisation with their head-quarters in Sirsa, Haryana, India - 125055. They use the basis of Sikhism to promote their anti-Sikhi message. Words like Naam, Hukamnama, Shabd are used to maintain a connection with Sikhi philosophy and with the masses. They also use the quotes from Gurbani to gain support among the popular mass of the public.

Recently, the dera organised a function where Gurmit Ram Rahim Singh, dressed in clothing that matched clothing worn in a well known painting depocting the 10th Master of the Sikhs. At this function he even reinacted some of the Guru's actions of the Vaisakhi of 1699. This resuled in his being booked by the police for trying to incite communal hatred. He is also facing charges of Rape and Murder in the court of Central Bereau of Investigation, New Delhi.[1]

After two days of violence in several Punjab towns and in Rajasthan between the followers of Dera Sacha Sauda and Sikh organisations over a controversial advertisement featuring sect head Baba Gurmeet Singh Ram Raheem, his followers called off their protest late today after the authorities assured action would be taken against those who burnt the chief’s effigy.

While Dera followers slowly withdrew from the flashpoint of Bathinda, tension continued to grip Amritsar, Patiala, Jalandhar and several other cities in the Malwa heartland as Sikh activists took out protest marches against the ad showing Gurmeet Singh stirring “amrit” in flowing robes — an image many Sikhs said was a copy of Guru Gobind Singh’s Bana.

At least 50 people, mostly policemen, were injured in Punjab and in Sriganganagar.

Chief Minister Parkash Singh Badal held a ministers’ meeting to end the spreading violence, which many here likened to the Akali-Nirankari clash of the late ‘70s.

“Nothing should be done to hurt the religious sentiments of anyone,” Badal said, pleading for calm.

Badal is having a hard time balancing inflamed passions on either side. Members of Sikh seminary Damdami Taksal threatened to take matters into their hands while other Akali leaders pointed a finger at the Congress.

The Punjab Congress, which won 37 of its 65 seats in Malwa belt, partly due to Dera support, called the violence a breakdown of law and order. State leader Rajinder Kaur Bhattal said Dera chief could have been misrepresented in the advertisement[1].

Security stepped up before decision by Sikh high priests Aman Sood Patiala, May 19:

Adequate forces have been pressed into service in various villages to check the movement of villagers in the city or in areas with presence of Dera followers, following the pending decision of the Sikh high priests on Sunday evening.

The villages along the belt of Bathinda, Patiala, Sangrur, Fatehgarh Sahib and Sirhind would be under scrutiny for the next 48 hours and all exit and entry points would be sealed from Sunday. Various meetings in the villages and reports with the policemen suggest that various organisations are planning processions from Sunday to protest against Dera Sacha Sauda.

The current uneasy peace in the state, following the alleged allusions to Guru Gobind Singh and the birth of the Khalsa controversy between the followers of Dera Sacha Sauda and Sikhs, could easily spark new troubles for the Administration, following decisions by Sikh organisations to hold processions in various parts of the state.

Police officials claimed that they are planning not only to seal off volatile areas, but also to limit the processions from Sunday morning. “If one section takes out a procession, the others would follow. Even a stray incident could turn into a fireball and destroy the atmosphere in the entire country,” said a senior police official. Security has been beefed up further in areas that could witness such processions beginning Sunday.

“We have decided to take out processions and prove our point that the Dera chief should unconditionally apologise to the entire Sikh community,” said Harddit Singh, who took part in of the processions in Patiala today. Sources said that small-time Sikh organisations in various villages are planning to hold protest rallies against the Dera Sacha Sauda sect. Following intelligence reports, the police have started to identify areas where the processions could turn violent. Patiala Zone IG, M. K. Tiwari has passed special instructions in this regard.

The growth of the Dera Sacha Sauda Randeep Singh Nandal Sunday, May 20, 2007 (Sirsa)

In the heat and chaos of Sirsa, an oasis of orderliness, lies the headquarters of the Sacha Sauda sect, where thousands gather everyday to hear the gospel from their spiritual leader.

Spread over 700 acres, it is a mini township with its own farmland, workshops, hospitals, schools, colleges, etc.

In fact, their printing press churns out 2,00,000 copies of the Dera's newspaper everyday, which is a proper 10 page full colour newspaper.

But all this development has taken place only after Baba Gurmeet Ram Rahim Singh took over as the leader of the sect in 1990 - from a base of a few acres to hundreds of acres; from a following of a few lakh to a couple of crore; from a few centres in the north to several more reaching Madhya Pradesh too.

The baba lives in an 18-acre stronghold within the mini-township. When he emerges, he moves around in regal style surrounded by his bodyguards.

I've never spoken to him. But when we see him, we get shakti with us, said a follower.

But if the Dera has grown, so has the number of controversies.

In 2001, Rajinder, a follower, fell-out with the leader and sometime later he was murdered at his hometown in Kurukshetra. Two Dera members are accused in this murder case.

Then a year later, Ram Chander Chatrapati, a local journalist, printed a letter that had allegations of sexual abuse by an anonymous woman against the Dera chief.

Chatrapati was shot dead at his home. Three Dera followers were arrested in the case, two of which were held at the murder site.

The people from the Dera had threatened my father and then one day he was shot dead, said Anshul, Son of Ram Chander Chatrapati.

Now all these cases are being investigated by the CBI .

We've said everything we had to and we won't say anything now, said Dr Aditya Arora, Spokesman, Dera Sacha Sauda.

Controversies notwithstanding, the baba's clout has grown.

The Dera's appeal is mainly to the marginalized and backward (uneducated) sections of the Dalits - a potent political force which the Dera chief successfully tested in February.

In the Punjab elections in 2007, he asked his followers to vote for the Congress, something that helped the party improve its tally in the southern area known as Malwa.

The Dera chief's son is married to the daughter of a Congress MLA. But it's not clear whether the chief will be playing a more prominent role.

For now, peace negotiators have told him to lie low[2].

After the Mumbai Sikh-Dera Sacha Sauda clash the Dera's leader has once again taken the Local Government's advise and decided not to venture out of his compound.