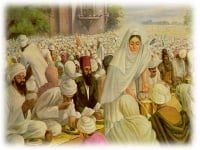 Mata Khivi (1506 - 1582) was born in 1506 to Karan Devi and Bhai Devi Chand Khatri in a small town called Sanghar which is now located in the province of Sindh in Pakistan.

Her father was a shopkeeper and trader, and was a popular man in the neighbourhood. His daughter inherited all his finest attributes of generosity and congenial spirit.

She was married in 1519, when she was 13 years old. Khivi was married to Lahina for 20 years before he became the second Guru of the Sikhs.

There is historical evidence that she had 4 children. Dasu, the eldest was born in 1524. Bibi Amro was born in 1532, followed by Bibi Anokhi in 1535 and son Datu in 1537. The family was content and doing well. As the wife of one of the town's richest men, Khivi must have enjoyed a great deal of respect. Her life was one of luxury and pleasure. .....More