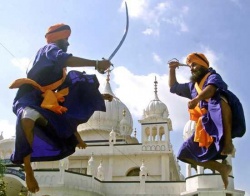 Gatka is an ancient martial art which has been thoroughly battle-tested and has existed in northern India for many thousands of years.

Although it uses the sword or (kirpan) as its primary weapon, many other weapons are available to the Gatka master.

Today, this art exists exclusively amongst the Sikhs who have passed down the flamboyant techniques through generations, since their sixth Guru, Guru Hargobind wore the two swords of Miri (temporal, worldly) and Piri (spiritual, transcendental).

The Sikhs have been responsible for the revival of this early art ensuring it's survival despite mass persecution of the native population in India by foreign invaders like the Mughals and others for many hundreds of years.

Gatka is a complete martial system which uses spiritual, mental and physical skills in equal portions to help one become fully competent in defending themselves and others. It is a system that can only be used as a last resort: "When all other means have failed, it is proper to take the sword in one’s hand" (Guru Gobind Singh) .....More