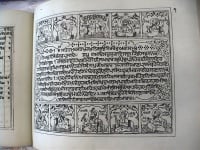 On September 1, 2004, the Sikhs celebrated the 400th year of the first installation of their holy scriptures called the Sri Guru Granth Sahib.

The Guru Granth Sahib was compiled and first installed at Harimandir Sahib (Golden Temple) in Amritsar in 1604. The holy book contains hymns written by the Sikh Gurus, saints and scholars of different religions and was completed on the 30 August 1604, it contains an important message for the whole of humanity.

The Guruship was passed to the holy Granth in 1708, some 104 year after its first installation in 1604. The holy Granth provides unique and unequalled guidance and advice for the whole of the human race. It is the torch that will lead humanity out of Kaljug, (the dark era) to life in peace, tranquillity and spiritual enlightenment for all the nations of the World.

"Guru Granth Sahib transcends creed and caste, cant and convention. It does not belong to the Sikhs alone. It consecrates the sayings of 11 Hindu bhakats and as many bard poets and seven Muslims, along with the teachings of six Sikh gurus. No other religion has included in its holy book the sayings of others, however revered." Quotation from Deccan Herald .....More