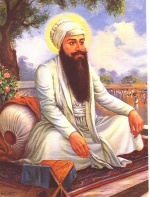 On October 9 every year, the worldwide Sikh community celebrates the birth of their fourth master, Guru Ram Das.

Guru ji was born at Chuna Mandi Bazaar, Lahore at the site of the present holy shrine on 9 October, 1534 where he spent his first seven years of life. Soon after birth, he was given the name "Jetha", meaning the "first born".

His simple and God-fearing parents, Hari Das and Anup Devi of Lahore were delighted at this precious gift from Waheguru. As he was growing up and in his teens, he would be found in the company of religious men. Jetha became a handsome young man.

While his fellow travellers returned to Lahore, Jetha decided to stay and become a disciple of Guru Amar Das ji. .....More