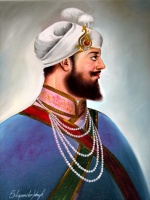 For many years now, the Sikh community worldwide has honoured the sixth Guru's vision of Miri and Piri, celebrating this vision on 21 July every year by calling this day, Miri Piri Divas.

Miri: This word has been derived from the Persian word - “miri”, which itself comes from the Arabic “amir” which literary means commander, governor, lord, prince, etc, and signifies temporal power, "political" or "material" power.

Piri: This word has also been derived from the Persian word - “pir” literary meaning saint, holy man, spiritual guide, senior person, head of a religious order and stands for spiritual power or moral authority. In Sikhi, the words miri and piri are frequently used together.

Miri Piri: The adoption of the term “miri piri” in the Sikh tradition has been made to connote the temporal and spiritual components of life; the materialist concept of human existence and the spiritual aspect of human life. .....More