From SikhiWiki
< SikhiWiki:Today's featured article
Jump to navigationJump to search
Guru Granth - guidance for all 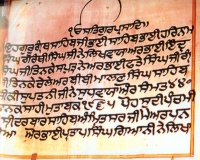 The Sikh scriptures are unique among the religious "Holy Books" of the world in that they don't just offer spiritual guidance for the Sikhs alone but impart guidance and assistance for all the peoples and religions of the world.

The Siri Guru Granth is a supreme treasure for all mankind. It is the true and permanent spiritual guide of the Sikhs. Guru Granth Sahib transcends creed and caste, cant and convention. It does not belong to the Sikhs alone. It consecrates the sayings of 11 Hindu bhagats and as many bard poets and seven Muslim saints, along with the teachings of six Sikh gurus.

No other religion has included in its holy book the sayings of others, however revered. The Guru Granth Sahib provides unique and unequalled guidance and advice to the whole of the human race. It is the torch that will lead humanity out of Kaljug, (the dark era) to a life in peace, tranquillity and spiritual enlightenment for all the nations of the world.

This is what Bertrand Russell said "....that if some lucky men survive the onslaught of the third world war of atomic and hydrogen bombs, then the Sikh religion will be the only means of guiding them." Russell was asked that he was talking about the third world war, but isn't this religion capable of guiding mankind before the third world war? In reply, Russell said, "Yes, it has the capability, but the Sikhs have not brought out in the broad daylight, the splendid doctrines of this religion which has come into existence for the benefit of the entire mankind. This is their greatest sin and the Sikhs cannot be freed of it." .....More