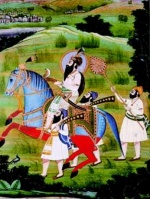 Guru Gobind Singh was famous for his blue coloured horse. In fact Guru Sahib is sometimes known as "Neelay ghoray whalla" or "one with the blue horse" and many a folk songs and vars sing the exploits of "Neelay ghoray they swaar" or "the rider of the blue horse". Just as his grandfather Guru Hargobind sahib had done, Guru Gobind Singh instructed his Sikhs to make offerings of arms and horses in readiness for the turbulent times ahead. In anticipation of this Guru Gobind Singh learnt the art of horsemanship from an early age under the guidance of his maternal uncle, Bhai Kirpal Chand.

As Guru Sahib grew older, he became an accomplished horseman and would spend time travelling the country-side on horseback blessing his people who would inevitably gather wherever he went. It is not clear where the blue horse, affectionately known as Neela (meaning "blue"), was acquired from. It may have been a gift from a royal dignitary or from a devotee. Even today the lineage of the stallions continues at Hazoor Sahib, Nanded.

The horses are kept in stables and are descendants of the original stallion of Guru Gobind Singh, although over time the blue colour has been diluted down to a grey white. No one is allowed to ride the horses as a mark of respect and they are brought out on the festival of Holla Mahalla or gurpurbs when they are beautifully decorated with tassels and riding gear.

On occasions, especially on the festival of Holla Mahalla, it has been said that the horse will get extremely sweaty and agitated, as if it is being ridden. It is difficult to get information about Guru Sahib’s horse, even more so about a blue horse. These horses are very rare and many people are sceptical that such horses exist. .....More