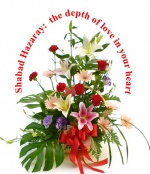 A cousin of Guru Ram Das came to Amritsar from Lahore especially to ask Guru Sahib to attend his son's wedding. Guru ji said, "I will not be able to go because I can't leave my duties here as Guru. Perhaps I can send one of my sons instead."

Guru Ram Das ji had three sons: Baba Prithi Chand or Prithia, Baba Mahadev and Arjan Mal. Prithia was in charge of collecting donations, of which he secretly took a portion for himself. When the Guru asked him to attend the wedding, Prithia said, "I have to take care of the collections. And I hate going to weddings."

Actually, he was afraid if he were away from the Guru for too long, he might not be appointed the Guru's successor. Having no luck with Prithia, Guru Ji then turned to Mahadev. Mahadev lived his life in meditation and said, "I have no desire to involve myself in worldly affairs."

Finally, Guru Sahib asked Arjan if he would go. Arjan said, "I only desire to do what you wish." Guru ji was very pleased. He asked Arjan to spend some time in Lahore to share the Guru's teachings with the Sikhs there. Any donations he received were to be given to the free kitchen to feed the poor. The last words he said to Arjan were, "You should stay in Lahore until I send for you by letter." .....More