From SikhiWiki
< SikhiWiki:Today's featured article
Jump to navigationJump to search 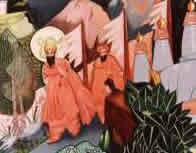 Guru Nanak saw the world suffering because of hatred, fanaticism, falsehood and hypocrisy. The people of the world were lost and doomed due to their wickedness and sin. So he decided that he had to travel, educate and press home the message of Almighty Lord so that these poor people would understand the true and pure message of the Lord.

So he set out in 1499 on his mission for the regeneration of humanity on this earth. He carried the torch of truth, heavenly love, peace and joy for mankind. For 1 year he spread his message of peace, compassion, righteousness and truth to the people in and around his home town.

Then in 1500, he embarked on his Divine Mission and went thousands of miles towards the east, west, north and south and visited various centers of Hindus, Muslims, Buddhists, Jainis, Sufis, Yogis and Sidhas. He met people of different religions, tribes, cultures and races. He travelled on foot with his Muslim companion named Bhai Mardana, a minstrel.

His travels are called Udasis. On his first Udasi (travel), Guru Nanak covered the eastern part of India and returned home after spending about 6 years spread the message of Waheguru. .....More