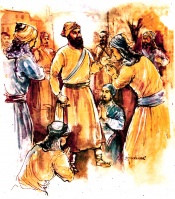 Every year on December 21, the Sikh community honors the two elder sons of Guru Gobind Singh who on this day in 1705 showed the world how to fight in battle; no matter how young you may be - the duty to Dharam and country comes first; before personal needs, pleasure and comforts.

It was around this time of the year that about 40 Sikhs in a mud fort were surrounded by over a 100,000 enemy soldiers. Then Baba Ajit Singh went before Guru Sahib and said, "Pita ji (dear father), permit me to go and fight on the battleground and grace me with the opportunity to make my life fruitful and worthy in service of the panth."

Guru Gobind Singh hugged his beloved son and gave him a Shastr (weapon). Every father wants to see their child get married, but this was the time to fight the enemy and defend the path of righteousness. Death was waiting and today Baba Ajit Singh would be marrying death.

The sun was about to rise. Guru saw that Nawab Wazir Khan wanted to take the fort of Chamkaur in one attempt. The Nawab surrounded the fort with his armies. Baba Ajit Singh boldly and valiantly came out of fort, accompanied with 5 other Singhs, .....More