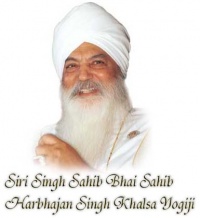 Harbhajan Singh Khalsa Yogiji (born as Harbhajan Singh Puri)[1] (August 26, 1929 - October 6, 2004), also known as Yogi Bhajan and Siri Singh Sahib, was a charismatic and influential proponent of Kundalini Yoga and Sikh Dharma. He is best known as the spiritual director of the 3HO (Healthy, Happy, Holy Organization) Foundation, which today is one of the world's largest yoga-teaching bodies, and for his outspoken defense of the holistic doctrine of Sikh teachings. He was widely known as a master of Kundalini Yoga and taught thousands to be teachers and spread the teachings.

Harbhajan Singh was born on August 26, 1929 into a Sikh family in Kot Harkarn, district Gujranwala, in the province of Punjab (British India). His father, Dr. Kartar Singh Puri, served the British Raj as a medical doctor. His mother was named Harkrishan Kaur. Theirs was a well-to-do landlord family, owning most of their village in the foothills of the Himalayas. .....More