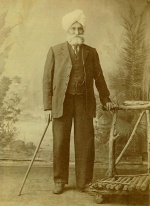 Most of us think that Sikh or South Asian migration to Australia is a recent phenomenon, spanning just the past few decades.

But not many of us know that our Sikh forefathers first came to Australia more than 150 years ago - at a time when the dust was yet to settle from the fall of Ranjit Singh's empire.

Displaying their true enterprising spirit, they crossed the seven seas to come to the land Down Under, in search of a better lifestyle and wages, and quickly endeared themselves to the local population here.

Country towns all over Australia are dotted with memories of these brave Punjabi migrants, who seem to have been welcomed by the locals despite the official "White Australia" policy.

Sadly, they are also forgotten in the annals of history. Initially, the migrants from India were indentured labourers, who worked on sheep stations and farms around Australia. Some adventurers followed during the gold rush of the 1850's. .....More