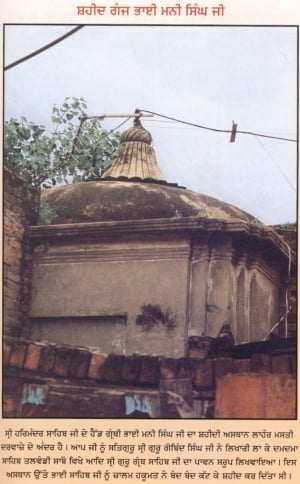 Gaining the permission of the Goverment, on the occassion of Diwali, he invited the Sikhs to assemble at Sri Harimandir Sahib but when Bhai Sahib came to know that the authorities conspired to kill the assembled Sikhs, he postponed the congregation. For this offence, Bhai Mani Singh was imprisoned. Earlier he was enticed and afterwards threatened with dire consequences but Bhai Sahib did not yield to the demand that he accept Islam and remained steadfast and firm. At the place in A.D. 1724, Bhai Mani Singh was martyred as the Muslim executioner dismembered his body joint by joint.

After bieng martyred, the Sikh's were thrown into a nearby well.

At first the management was with the Mahants. In 1923, the local committee took over the management which was transferred to S.G.P.C. from 1927 until the partition, after which the site was locked up, as it is today.