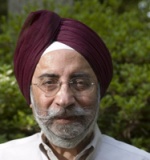 He has been an adjunct Professor with the University of Virginia School of Architecture.

He spent 25 years as the director of planning and six years as director of strategic planning for the city of Charlottesville. His hometown is Nainital, India. His Bio on the city's web site is marked - pending at this time.

Satyendra Huja was elected to Charlottesville City Council in November of 2007 [1] and reelected to a second term in the November 2011 election.

He was selected to serve as Charlottesville's Mayor at the first council meeting of 2012. [2]

Mr. Huja is the President of Community Planning Associates, focusing on planning, design, development, and management consulting. He was hired by the Charlottesville in 1973 to serve as director of city planning and community development. From 1998 to 2004, he was director of strategic planning with experiences in the area of Downtown Revitalization, Housing, Historic Preservation, Transportation Planning, Art and Culture Activities, and Neighborhood Revitalization.

In response to Charlottesville Tomorrow's preparations for Election 2007, Mr. Huja said his favorite volunteer activity was working in a Langar (community kitchen).

Huja is a member of the Sikh religion.

Huja is a resident of the Greenbrier neighborhood.

A citizen appeared before Council at their July 18, 2011 meeting to complain about Huja's accent. Pat Napoleon said Huja should be required to hire a translator because she found it hard to understand him. Councilor Kristin Szakos defended Huja and called for a vote of confidence in him, which passed 4-0.

As of February 7, 2011 Huja represents the City on the Thomas Jefferson Planning District Commission, the MPO Policy Board, the Jefferson Area Board for Aging, and the Charlottesville's 250th Anniversary Steering Committee.[3]

Huja announced a bid for a second term on March 25, 2011. [4] He was the top vote-getter in the Charlottesville Democratic Party's fire-house primary. He also received the most votes in the general election. Both he and Councilor Kristin Szakos are potential candidates to succeed Dave Norris as Mayor of Charlottesville.

“I am honored to serve our community,” Satyendra Singh told SikhNN. It’s a very supportive community. “How else can a Sikh get elected?”

He is the only Sikh resident of Charlottesville, he said. All other Sikhs in the city are students at the University of Virginia.

“I’m the only one,” he said. “I’m it.” The nearest gurdwara is in Richmond, about 70 miles southeast.

Charlottesville is a university town nestled in central Virginia, about 100 miles southwest of Washington. According to the city’s Web site, it was established in 1762 and now encompasses 10.4 square miles. Its population is almost 43,500, according to the 2010 Census.

Serving his second term on the city council, Satyendra Singh was unanimously elected on Jan. 3 by the other four council members to serve as the city’s mayor, its first Sikh mayor.

“He is very visible in terms of community involvement,” said Dierdre Smith, a new council member, who has known him for a long time for his work as city planner. “Everybody knows him. There have been no squeaks about his being Sikh.”

“He has been around the community for decades,” said Dave Norris, the previous mayor and current councilman. “People are accustomed to seeing him. (His religion) never comes up as a concern.”

A couple of citizens complained about his accent last year during his re-election campaign, Norris said. But the council unanimously passed a vote of confidence in him.

“We appreciate diversity,” Norris added. “Most people don’t share that concern because he was the largest vote getter in the re-election.

The decision came down to who had seniority on the council and who had the most successful election campaign, Norris added. "He was the highest vote getter.”

The other two council members, Norris and Kristin Szakos, are up for re-election in 2013. Council members serve four-year terms, and the council elects a mayor every two years.

Satyendra Singh, originally from Nainital, India, came to the United States in 1960. He received his mater’s degree in urban planning from Michigan State University. And, most notably, was planning director for Charlottesville for more than 30 years.

After retiring, he ran for city council and won his first term in November 2007, and his second term in 2011. He also is adjunct faculty at the University of Virginia’s architecture school where he teaches urban planning courses.

As head of the city council, Satyendra Singh said he hopes to improve the community by providing better jobs, job training, affordable housing and creating a better bicycle path network for the college-based community.

The Daily Progress of Charlottesville @ www.dailyprogress.com