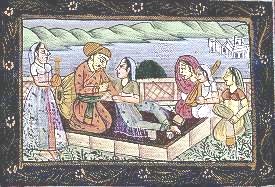 Sassi Punnu (or Sassi Panhu) is one of the four popular tragic romances of the Sindh. The other three are Heer Ranjha, Momal Rano and Sohni Mahiwal. Sassi Punnun was written by the Sindhi and Sufi poet, Shah Abdul Latif Bhittai in (1689-1752).

Sassi was the daughter of the King of Bhambour (it is Sindh whose ruins can be seen today). Upon Sassi's birth, astrologers predicted that she was a curse for the royal family’s prestige. The Queen ordered that the child be put in a wooden box and thrown in the river Indus. A washerman of the Bhambour village found the wooden box and the child in the box. The washerman believed the child was a blessing from God and took her home. As he had no child of his own, he decided to adopt her. 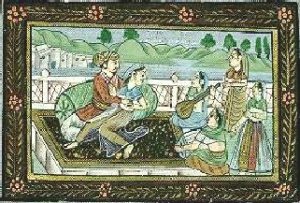 Sassi was a romantic soul, the daughter of King Adamkhan of Bhambour. At her birth the astrologers predicted that she was a curse for the royal family’s prestige. The king ordered that the child be put in a wooden chest with a ‘taweez’ tied on her neck and thrown into the river Chenab. The chest was seen floating by Atta, the washer man of Bamboon village. The dhobi believed the child was a blessing from God and took her home and adopted her as his child. Many, many years passed by and the king did not have another child, so he decides to get married again. When he heard that the daughter of Atta, the washer man, was as beautiful as the angels, the king summoned her to the palace. Sassi was still wearing the tabiz (amulet), which the queen mother had put around her neck when she was taken away to be drowned. The king recognized his daughter immediately on seeing the tabiz. The pent-up sufferings of the parents flowed into tears. They wanted their lost child to return to the palace and bring joy and brightness to their lives, but Sassi refused and preferred to live in the house where she had grown up. She refused to leave the man who had adopted her.

Sassi did not go to the palace but the king presented her with abundant gifts, lands and gardens where she could grow and blossom like a flower. As all the rare things of the world were within her reach she wanted to acquire knowledge and sent for learned teachers and scholars. She made sincere efforts to increase her knowledge. During this time she heard about the trader from Gajni, who had a garden mad with a monument, the inner portion of which was enriched with exquisite paintings.

Meeting Of Saasi And Punnu

When Sassi visited the place to offer her tributes and admire the rich art, she instantly fell in love with a painting, which was a masterpiece of heavenly creation. She soon discovered this was the portrait of Prince Punnu, son of King Ali Hoot, the ruler of Kicham. Sassi became desperate to meet Punnu, so she issued an order that any businessman coming from Kicham town should be presented before her. There was a flutter within the business community as this news spread and someone informed Punnu about Sassi’s love for him. He assumed the garb of a businessman and carrying a bagful of different perfumes came to meet Sassi. The moment Sassi saw him she couldn’t help saying," Praise to be God!"

Punu’s Baluchi brothers developed an enmity for Sassi. They followed him and on reaching the town they saw the marriage celebrations of Sassi and Pannu in full swing, they could not bear the rejoicing. That night the brothers pretended to enjoy and participate in the marriage celebrations and forced Punnu to drink different types of liquor. When he was dead drunk the brothers carried him on a camel’s back and returned to their hometown Kicham.

The next morning when she realized that she was cheated she became mad with the grief of separation from her lover and ran barefoot towards the city of Kicham. To reach the city she had to cross miles of desert land, the journey that was full of dangerous hazards, leading to the end of world. Her end was similar to the end of Kaknoos bird. It is said that when this bird sings, fire leaps out from its wings and it is reduced to ashes in its own flames. Similarly Punnu’s name was the death song for Sassi who repeated it like a song and flames of fire leapt up and she was also reduced to ashes.