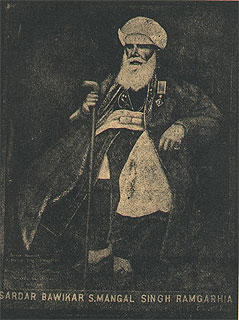 During his younger days, Mangal Singh remained in attendance on Maharaja Ranjit Singh who gave him jagirs in several villages,in Dharamkot, Qadian etc in Gurdaspur District of Punjab. After his father`s death, Mangal Singh was sent to Peshawar in command of four hundred foot and one hundred and ten so wars of the old Ramgarhia clan. There he served under Tej Singh and Hari Singh Nalva and fought in the battle of Jamrud in April 1837.

In 1839, he was recalled and sent to the hill country between the Beas and the Sutlej, and during the absence of Lahina Singh Majithia in Peshawar, he was placed in charge of the hill forts. During the reign of Maharaja Sher Singh, he was chiefly employed under Lahina Singh in Suket, Mandi and Kulu. He was one of the commanders sent to chastise Fateh Khan of Mittha Tivana in 1844. On the retirement of Sardar Jodh Singh Maan in 1862, Mangal Singh was appointed manager of the Harmandir Sahib. In the same year, he was appointed an honorary magistrate of the city of Amritsar. In 1876, the Prince of Wales conferred upon him the Companionship of the Star of India. Sardar Mangal Singh died at Amritsar in February 1879.