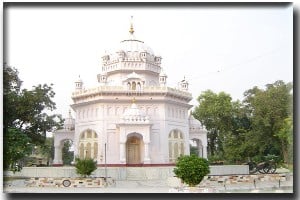 Saragarhi Memorial Gurdwara at Firozpur was been built in the memory of 21 Sikh soldiers of the 36 Sikh Regiment who fell in heroic defence of Fort Saragarhi in Wazirstan on September, 12 1897 while defending the fort against an attack of ten thousand Pathans.

The 36 Sikh Regiment was raised at Firozpur on April 1887 under the command of Colonel Cook in January 1897 the Regiment was sent to Fort Lock Hard of which Saragarhi and Gulistan were important posts On the morning of September, 12 about ten thousand pathans surrounding Saragarhi and taking positions within one thousand yards of the fort opened fire.

There were only 21 Sikh soldiers in the fort who returned fire as outside help was out of question. Sepoy Gurmukh Singh Hallo-graphed to his commander Colonel Naughten that their fort had been attacked by the enemy. On order from the commander these soldiers continued to return fire. The battle continued for seven hours and then the Sikhs fell one by one. At about 2 PM the Garrison began to run out of ammunition and a request was made to the colonel for more supplies. NO supplies came but the soldiers were told to stick to their guns.

In the meantime the Pathans asked the Sikh soldiers to surrender but they preferred to die fighting. In the end the leader of the brave band Havildar Ishar Singh was left alone. With consummate coolness regardless of the bullets whistling around his head Havildar Ishar Singhhad kept up haliographic communication with Fort Lockhart.

According to a contemporary Army Authority Havildar Ishar Singh the only man alive and unwounded out of the little band taking his rifle placed himself in the front of a doorway leading from the room into which the enemy had forced their way, prepared to sustain the fight along calmly and steadily. He loaded his rifle and delivered the fire. Unconquered even in death the Sikh War cry rang from his dying lips in defiance of the foe. Then followed silence broken only by the crackling of flames.

The memorial Gurdwara at Ferozepur was built at a cost of Rs, 27,118 by the Army Authorities to honour these brave soldiers. The gurudwara was declared open in 1904 by Sir Charles Pevz, the then Lieutenant Governor of Punjab. Every year on September, 12 a religious congregation is held in the morning while reunion of Ex-servicemen in the evening.