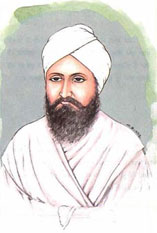 Sant Karam Singh (1826-1903) was born in 1826 at village of Qa/iari in Gu|jarkhan lahsil of Rawalpindi district, now in Pakistan. His father, Kirpa Singh, and mother, Subi, were devoted Sikhs, and Karam Singh inherited their religious disposition. He learned to read and write Punjabi from the village granthii (scripture reader) and enlisted in the Sikh army of Lahore in 1844. He received the rites of the Khalsa at the hands of Ram Singh, a follower of Bhai Maharaj Singh, and spent most of his time in meditation. Upon the dissolution of the Sikh army after the annexation of the Punjab to British India in 1849, Karam Singh joined the Corps of Guides which had been raised by the British in the cis-Sutlej territory in 1846 which was later reorganized as 5th (Guides) Battalion of the 12th Frontier Force Regiment. The town of Mardan, near Peshawar, was its normal duty station. For him the change made little difference as he continued spending his off duty hours in prayer at the regimental gurudwara or in solitary meditation on the bank of the nearby stream Kalapani. He also did sewa (voluntary service) in the common kitchen.

In 1857, the Guides formed part of the force that went from the Punjab to the aid of the embattled British who were locked in a critical life or death struggle with rebelling Indian soldiers and others at Delhi. Delhi fell to the British on 20 September 1857 after a siege lasting five months. The victorious soldiers fell upon the city and freely indulged in looting and a general massacre of the city's citizens. According to an eyewitness account quoted in Martin R. Montgomery's book, The Indian Empire, "Enormous treasures were looted, and each individual soldier amassed a rich booty. Almost every house and shop had been ransacked and plundered after its inmates were killed, irrespective of the fact whether they were actual rebels or even friends of the British. The General had issued an order to spare women and children, but it was honoured more in breach than in observance."

During this unrestrained pillage, officially permitted, Karam Singh, who had come to Delhi with his regiment, protected several families by standing guard outside their doors, refusing to accept any reward for his help. He was one soldier who stood above the wholesale plunder. Karam Singh returned to Mardan with his regiment. To be able to devote himself fully to his spiritual pursuits, he resigned from the army. Another account of his leaving the army is still told, even today— …that once as he remained absorbed in meditation for long hours, he was reported absent from duty, but the officer who went to check up on the report - found him present. When Karam Singh, it is said, heard of this strange occurrence, he quit the army.

His fame as a sant spread and visitors began to pour in to see him. To accomodate the growing crowd of visitors, a few thatched huts were constructed near Hoti, a town close to Mardan, a well was sunk, and a Guru ka Langar (free communal kitchen) was started, as usual by voluntary service. Even soldiers from his former Guides unit participated, as well. Sant Karam Singh who still loved the solitude he had always courted, did not relish all the hubbub and often retired to a giiphd (an underground cell or dugout), 3 km away. He did not deliver lengthy discourses or sermons, but people felt inspired by his pious manner. Many of his visitors became his disciples. Hindus, Muslims (some from the turbulent Pathan tribals) were among those who became his devotees. Until he 'retired' he only left his Dera at Mardan (many people from the area find cooler climes in the hottest months) once during the remainder of his life--a pilgromage to to Parija Sahib, Amritsar and Hardvar.

In the beginning of 1903, he appointed Aya Singh, an orphan who had lived at his dera since childhood, as his successor. He then retired to the village of Saidu, 25 km away where he stayed in the house of a poor old lady. Mat DcvakT. But he did not have long to live and passed away peacefully on 21 January 1903. According to his own wish, his body was not cremated but carried in a procession of hymn singing mourners to the River Indus onto which it was consigned. A memorial was raised in his honour at Saidu.

A Sikh Sant of much renown and influence Sant Karam singh had 101 of his disciples to achieve the stage of brahmgyani.