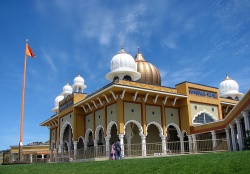 The San Jose Gurdwara Sahib, a beautiful Gurdwara in California

San Jose Gurdwara Sahib is a gurdwara nestled in the foothills of the verdant and lush Evergreen Valley of San Jose, California is one of the Greater San Francisco Bay Area's well-known spiritual and tourist destinations --- San Jose Gurdwara. The former address of this beautiful, majestic landmark in San Jose was 2785 Quimby Rd, San Jose, CA.

Glory be to God! Entrust unto the Lord what thou wishest to be accomplished. The Lord will bring all matters to fulfilment. Know this as truth evidenced by Himself.

The late Pyra Singh Obhi and many other dedicated sevadars of the community founded the Sikh Gurdwara in 1984. The South Bay Sikh Community at that time was growing rapidly and there was an urgent need for a Gurdwara. Initially, there were no funds available and Gurdwara started to rent an East Bay Community Center.

We have started our fund-raising program for the building of Phase 2. We welcome your tax-deductible donations. This is a 501(c)(3) non-profit organization. Please make your checks payable to SIKH GURDWARA SAN JOSE, ATTENTION: BOB S. GILL.

We invite everyone to visit us at San Jose Gurdwara!

Your suggestions and comments are welcome.