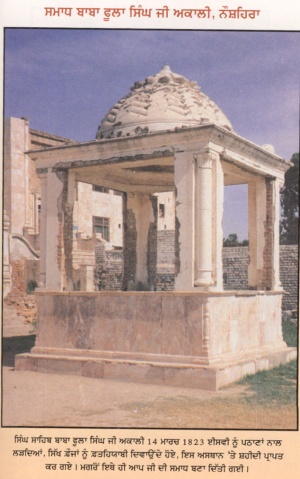 Phoola Singh Ji was a renowned general of Maharaja Ranjit Singh. He was born in the family of Sardar Ishar Singh in Samvat 1818. He performed great services for the Sikh nation and gurdwaras by activating the Akali Dal. A tower built in his memory is in Amritsar and there are special quarters for his contingent. Akali Ji led the army of Ranjit Singh in many battles and emerged victorious. He martyred while fighting Frontier Pathans on 14th March 1823 AD (1st Chaiter Samvat 1879). Later his samadh was erected here. This place is at a distance of 8 kilometer while traveling towards Attock from Noshehra (a town of Peshawar District). It is in village Pir Sabaq on the other bank of the River Lundi about 4 kilometer from GT road. It is not accessible without a boat. Its construction is beautiful but no maintenance is being carried out these days. There is large endowment of land which Mahant tried to sell. A suit was filed against him in 1916 which was decided in 1918. He was dismissed and the control of the same was handed over to Gurdwara Parbandhak Committee in 1918. In the past fairs used to be organised on Visakhi and Dasehra but that's history now.