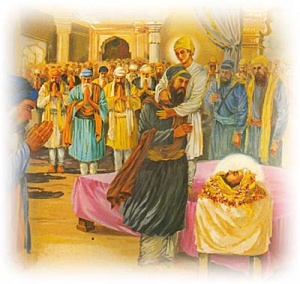 Guru Tegh Bahadur while imprisoned at Delhi in an iron cage had been made to watch his devotees Bhai Mati Das, Bhai Sati Das brothers who had been raised as Hindu Brahmins and Bhai Dayal Das as they were tortured to death before his eyes. Throughout their torture they had maintained eye contact with their Guru, mouthing the name of WaheGuru on their lips to the last. Seeing this he composed the 55th sloka and sent it by a messenger to his son young Gobind Rai.

"My associates and companions have all abandoned me,
No one remains with me to the last,
Sayeth Nanak, in this calamity God is my only support."

Young Gobind Rai replied to the sloka with the 54th sloka, bearing the name of the 9th Guru.

"Strength is thine, thy fetters are loosed,
Thou hast every resource,
Nanak, everything is in thy power;
It is only thou who can assist thyself".

Pleased at receiving the sloka and message from his son, he remarked that his son was fit for the Guruship. He then sent for five paise and a coconut. When he had them, he placed them in front of him and meditated on his distant son, bowing to him in distant Anandpur. He then sent the items to his young son through a messenger. Back at Anandpur the Guru's wife had a vision in which her husband appeared with the five coins and a coconut. She saw her husband bow to her son Gobind Rai in token of his appointment as the new Guru. She then percieved that Guruji's head was separated from his body. This startling vision bothered her enough to ask her son to send a Sikh to Delhi at once to see if her vision was true.

Back in Delhi Aurangzeb sent a message to Guru Tegh Bahadur with a final offer, either acept Islam or work a miracle! Saying that if he would only work a miracle then he could return to his Sikhs and continue as their Guru.

The Guru replied that he would never abandon his faith and he would work no miracle. Hearing of his prisoner's reply Aurangzeb ordered Guruji's execution without delay. It was then that the messenger from Anandpur arrived. The great man told the messenger to stand near him, during the execution, so that he might catch his head as he (Guruji) bent over for the executioners sword. Hearing this the Muslim Govenor of the jail began to weep. Then Sayed Adam Shah came with the warrant signed by Aurangzeb. Adam Shah begged the Guru to embrace Islam. He replied, My religion is dearer to me than my life, I cannot renounce it.

He was taken out of his cage to a well under a Banyan tree where he was allowed to bathe and then he recited the Japji. He had asked Sayid Adam Shah to strike when he bowed to God at the conclusion of his prayer. Adam Shah did as the Guru requested, the Sikh from Anandpur was able to catch his falling head as the Guru had suggested. He then covered it respectfully and slipped out of the crowd. Guruji's last request had been that he return his severed head to Anandpur so that it could be cremated there. That night the Sikh, Bhai Jaita started to Anandpur as fast as his feet could take him. He managed to reach Anandpur Sahib and laid the Guru's sacred head respectfully in front of Guru Gobind Singh. The Guru embraced Bhai Jaita and said,

"Rangreta Guru ka Beta"
Rangreta is the son of the Guru.

The body of the Guru was cremated by a Lubana Sikh where Gurdwara Rakab Ganj now stands. He had he placed the Guru's body on a funeral pyre in his small hut near Delhi and set his home afire.