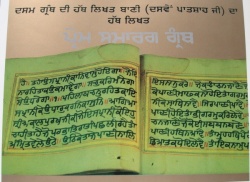 Prem Sumarag Granth (the true way to love) is an anonymous work in old Punjabi evoking a model of Sikh way of life and of Sikh society.

Written probably in the eighteenth century, it is a kind of rahitnama attempting to prescribe norms of behaviour, religious as well as social, private as well as public, for members of the Khalsa Panth.

It also provides a comprehensive model of Sikh polity with details concerning civil and military administration. Although known to earlier Sikh scholars, it was published for the first time in 1953 by the Sikh History Society, Amritsar, edited with an elaborate introduction by Bhai Randhir Singh, who accidentally in 1940 came by a partly mutilated manuscript, which he revised with the help of another manuscript preserved in the Punjab Public Library, Lahore. A second edition was brought out by New Book Company, Jalandhar, in 1965.

The work is divided into ten dhidos (chapters) and each dhidois subdivided into several bachans (utterances or topics).

Chapter I opens with what may be called a prologue. It is in the form of an artistic device recalling the beginning of Guru Gobind Singh's Bachitra Ndtak where God addresses the Guru on the purpose for which he was being sent into the world of the mortals. That was to expunge evil and promote virtue.

Following this mode, the author of Prem Sumdrag invests the code of conduct he is enunciating with divine sanction and intimates how important it was for the Sikhs to abide by it to realize the object for which the Khalsa was created by Guru Gobind Singh.

The daily routine prescribed for a Sikh consists in getting up early in the morning, taking a bath, reciting Japu and Jap five times in the morning, Japu and Jap at noon, Sodar, Japu, and Jap in the evening and' readings from the Bachitra Natak and Kirtan Sohila before going to bed.

The stress is on constant remembrance of God, on honest work, mutual help and love. A Sikh must shun flirtation and adultery, greed, anger, theft, egocentricity, speaking ill of others, falsehood and even truth that harms others. He must always keep the arms by his side, work for his living, be hospitable, address fellow Sikhs as 'Singh ji,' and resign himself, in all situations, to the Will of the Almighty. The book also lays down the method of Khalsa initiation and principles of social behaviour (3); rituals to be observed at childbirth (4);

rules regarding the selection of lifepartners, the age for marriage, permitting a widow to remarry (5); the kind of food a Sikh should partake of and the kind, especially intoxicants, that he must avoid, laying special emphasis on cleanliness (6); the dress and ornaments a Sikh should wear, the occupations he should pursue and those he must forbear from (7). Truthtelling is prized most. He who perjures his oath shall "into the dark pit of hell be cast." He who renders false witness sins. Even kings cannot claim exemption from these moral norms.

"Do not cry; do not lament, do not abjure sleeping on beds; accept (His) hukam as true and be resigned. Do not attend the funeral of a masand or of the followers of masandr, do not mix with them or with those Sikhs who observe tonsure. Feel not so restrained in respect of others, be they Hindu or Musalman...."

According to him, the ideal form of Sikh state is monarchy. Power was to be vested not in the Panth as a whole, but in a single ruler assisted by a sagacious minister. There were to be other pious and learned advisory councillors. The King, however, enjoyed absolute authority, without any check or restraint except for the voice of his own conscience. The foremost duty of the ruler was in fact to safeguard his own authority and to be always prepared to smother any challenge to it. The whole scheme of administration was drawn up on the model of medieval feudalism with its mansabddri and jdgirddn systems.

The king, however, was personally to supervise the administration of justice. He must be accessible to all his subjects, and his decisions must be impartial and independent of any considerations of belief or religion. At the same time, he was to remember that he owed special responsibility to the Khalsa Panth.

Gurmukhi (Punjabi) was to be the official language of the State and all Sikh children were to be given instruction in the Khalsa rahit or code of conduct. For the author the ideal Sikh State is an absolute, but benevolent, monarchy which points to the possibility of the work having been written after Maharaja Ranjit Singh had occupied Lahore in 1799. The oldest MS. of Prem Sumarag so far discovered is dated 1801.

Chapter IX deals with miscellaneous matters such as rules of inheritance and distribution of property, debts and interest rate, slaves, animals, gardens and agricultural land.

The last chapter may be regarded as an epilogue. It propounds the realization of sahaj jog (state of equipoise and contentment) as the ideal of human life. The path of sahaj is the most easy and at the same time the most difficult one. The seeker of sahaj must equip. himself with dayd (compassion), sevd (service) , bhdo (love) and bhagati (fervent devotion to God). In sum, complete submission to God's Will and indifference to both pain and pleasure was the essence of the "way of love."

Earlier the Macedonian conqueror had defeated King Poris only to put him back in charge of his Kingdom. Wherever he went he was tolerant of faiths other than his own, treating those he conquered with respect. The Arabs lauded him as Iskandar calling him Dhu’lquarnein (two horned Alexander). They even included him among the prophets. While his conquests were not spoken of in most of India his march through Punjab and Sindh must have left oral traditions of his rule.

The name Iskandar was quickly reduced to Iskanda and finally Skanda in the same way that the Punjabi language has always simplified words. Did his trip through the land of the five rivers lend any thoughts or serve as a guideline to the author of the Prem Sumarag Granth or the Maharaja?

Or had the thousands of years of Kings with advisors and India's system of village Panches (the fifth leader the Sarpanch could break any deadlock) laid the form of the birth of democracy in Greece?

The ancient Kings of India's first duty was to watch over his kingdom's subjects. The ancient veds suggested the replacement of those who did not.