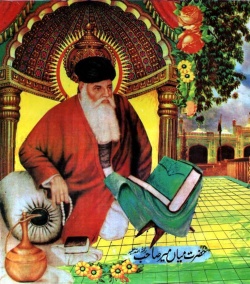 Mir Mohammed Muayyinul Islam, (1550-1635) popularly known as Sain Mian Mir was a famous Muslim Sufi saint who resided in Lahore specifically in the town of Begampura (in present-day Pakistan). He belonged to the Qadiri order of Sufism. He was born at Sevastan (Sindh) August 11, 1550. He spent most of his life in and around Lahore.

A close friend of The Fifth Padshah Guru Arjun Dev Ji he was invited to lay the foundation stone of the Harmandir Sahib, (now known worldwide as the Golden Temple) on 1st Magh, Samvat 1647 (13 January 1588 AD). Mian Mir raised slogans to mourn the martyrdom of Guru Arjun Dev. He never accepted any gift sent by Emperor Jehangir, Emperor Shah Jehan, their Ministers or nobles. He died on 17th Rabiulawwal 1045 Hijri and according to his will was buried beside Mian Natha Ji who was one of his bosom friends in the village of Hashimpur.

Perhaps, his most famous disciple was Dara Shikoh, the eldest son of Mughal emperor Shah Jahan, who had a grand tomb built over Mian Mir's grave, which still is gracefully standing today. The construction of the tomb was in progress when Aurangzeb occupied the throne. He had the red stones that had been purchased by Dara Shikoh for Mian Mir's tomb removed, using them in the Badshahi Mosque of Lahore which now faces the Lahore fort.

Thus Mian Mir's Mazar (tomb) was not built according to the wishes of Dara Shikoh. At the command of Maharaja Ranjit Singh the tomb was repaired and renovated with Rs. 500 being granted from the royal exchequer. The Maharaja attended the fair yearly making large contributions. The fair is still held every year and it is now with the Auqaf Department.

Mian Mir ji is still highly respected by the Sikhs. He was a man who had no prejudice against any religion and had a very deep love of Guru Nanak's Institution. He travelled often to Amritsar to meet with Guru Arjan Dev ji. In turn whenever the Guru visited Lahore, he would always meet with Saint Mian Mir. Saint Mian Mir knew a large number of the Gurus' verses by heart.

His shrine in Lahore still attracts hundreds of devotees each day.