From SikhiWiki
(Redirected from Palki sahib)
Jump to navigationJump to search 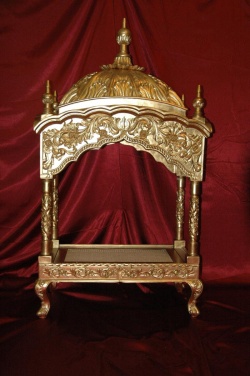 Palki: is where the Guru resides, when the Guru is carried from one place to another and also when in the Darbar hall. Sikhs regard the holy scriptures as their living Guru. The Guru Granth Sahib is placed on the Manji Sahib - a raised platform covered by the Palki - a canopy, to show its importance. The Guru Granth Sahib is covered by a piece of beautiful material called a Rumalla and flowers may also be placed round the Guru. Around the top of the canopy is engraved the 'Waheguru' which means 'Wonderful Lord' or such other words from the holy scriptures.

The palki sahib may incorporate a manji, a small raised platform where the Guru Granth is place wrapped in various types of Rumallas (decorated cloth sheets) and support by small pillows. The surrounding canopy has creative and distinctive design with decorative artistry.

Most palkis are constructed with careful attention by skilled craftsmen to a very high standard of detailed design and quality workmanship. The palki gives the image of a throne and presents the Guru in a bold and impressive setting just as you would have seen a king or emperor in their darbar.

Chaur Sahib is an implement normally found next to the Manji Sahib where the Sri Guru Granth Sahib is placed during the day within the Gurdwara's Darbar Sahib (Main Hall). The chaur is these days constructed from yak hair and has a wooden or metal handle.