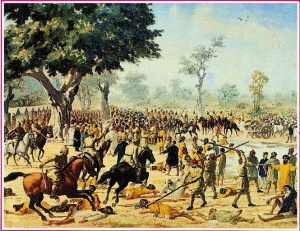 At Guru-ka-Bagh, twenty kilometres from Amritsar, Sikhs' capacity for suffering and resistance was put to further trial after freeing many Gurdwaras through peaceful resistance. Sundar Das, the mahant, had by mutual negotiations made over the shrine to the Shiromani Committee, taken the Sikh baptism and parted with his mistresses except one whom he honourably married.

But he later denied part of the agreement, saying that, though he had surrendered the Gurdwara to the Shiromani Committee, the piece of land known as Guru-ka-Bagh attached to it was still his property. He objected to Sikhs cutting down trees on that land for the langar. The police, willing to oblige him, arrested on August 9, 1922, five Sikhs on charges of trespassing. These arrests were made not on Sundar Das' complaint, but on a confidential report received by the police. The following day, the arrested Sikhs were hurriedly tried and sentenced to six months' rigorous imprisonment.

Undeterred by this action of the government, Sikhs continued the old practice of hewing wood from Guru-ka-Bagh for the daily requirements of the community kitchen. The process of arrests and convictions proving of little avail, police tried a new technique to terrorize the reformers. Those who came to cut firewood from Guru-ka-Bagh were beaten up in a merciless manner until they lay senseless on the ground.

They were dragged about by their hair and left contemptuously off when the police thought they had been served well enough. The Sikhs suffered all this stoically and went in larger numbers day by day to submit themselves to the beating. From August 31, the number was raised to 100. Every day a batch of one hundred volunteers would start from the Akal Takht pledged to suffer their fate silently.

The police would stop them on the way and smite them with heavy brass-bound sticks and rifle-butts. The belabouring continued until the batch lay prostrate to a man. The Sikhs displayed unique powers of self-control and resolution, and bore the bodily torment in a spirit of complete resignation. None of them winced or raised his hand.

The Rev. C.F. Andrews, who visited Amritsar, gave a graphic description of the passive resistance of the Akalis in the account he wrote.

". . .when I reached the Gurdwara (at Guru-ka-Bagh) itself, I was struck at once by the absence of excitement such as I had expected to find among so great a crowd of people..."

"Close to the entrance there was a reader of the Scriptures who was holding a very large congregation of worshippers silent as they were seated on the ground before him. In another quarter there were attendants who were preparing the simple evening meal for the Gurdwara guests by grinding the flour between two large stones. There was no sign that the actual beating had just begun and that the sufferers had already endured the shower of blows."

"But when I asked one of the passers by, he told me that the beating was now taking place. On hearing this news, I at once went forward. There were some hundreds present seated on an open piece of ground watching what was going on in front, their faces strained with agony. I watched their faces first of all, before I turned the corner of a building and reached a spot where I could see the beating itself. There was not a cry raised from the spectators, but the lips of very many of them were moving in prayer....."

"... There were four Akali Sikhs with their black turbans facing a band of about a dozen policemen, including two English officers. They had walked slowly up to the line of the police just before I had arrived and they were standing silently in front of them at about a yard's distance. They were perfectly still and did not move further forward. Their hands were placed together in prayer and it was clear that they were praying. Then without the slightest provocation on their part, an Englishman lunged forward the head of his lathi (staff) which was bound with brass. He lunged it forward in such a way that his fist which held the staff struck the Akali Sikh, who was praying, just at the collar-bone with great force. It looked the most cowardly blow as I saw it struck...."

"The blow which I saw was sufficient to fell the Akali Sikh and send him to the ground. He rolled over, and slowly got up once more, and faced the same punishment over again. Time after time one of the four who had gone forward was laid prostrate by repeated blows, now from the English officer and now from the police who were under his control. The others were knocked out more quickly. On this and on subsequent occasions the police committed certain acts which were brutal in the extreme."

"I saw with my own eyes one of these police kick in the stomach of a Sikh who stood helplessly before him. It was a blow so foul that I could hardly restrain myself from crying out aloud and rushing forward. But later on I was to see another act which was, if anything, even fouler still. For when one of the Akali Sikhs had been hurled to the ground and was lying prostrate, a police sepoy stamped with his foot upon him, using his full weight; the foot struck the prostrate man between the neck and the should..." "The brutality and inhumanity of the whole scene was indescribably increased by the fact that the men who were hit were praying to God and had already taken a vow that they would remain silent and peaceful in word and deed...."

"There has been something far greater in this event than a mere dispute about land and property. It has gone far beyond the technical questions of legal possession or distraint. A new heroism, learnt through suffering, has arisen in the land. A new lesson in moral warfare has been taught to the world...."

"One thing I have not mentioned which was significant of all that I have written concerning the spirit of the suffering endured. It was very rarely that I witnessed any Akali Singh, who went forward to suffer, finch from a blow when it was struck. Apart from the instinctive and involuntary reaction of the muscles that has the appearance of a slight shrinking back, there was nothing, so far as I can remember, that could be called a deliberate avoidance of the blows struck. The blows were received one by one without resistance and without a sign of fear."

The Governor of the Punjab visited Amritsar on September 13, 1922, and stopped the beating of Sikh volunteers. Arrests began to be made instead. At the government announcement that preparations were being made to accommodate ten thousand Akalis in gaols, the Sikhs stepped up their campaigm. Jathas grew larger in size.

The government at last gave in. The offices of Sir Ganga Ram, a rich and influential citizen of Lahores were secured. On November 16, 1922, he obtained the Guru-ka-Bagh land on lease from the mahant and wrote to government that he required no police protection. The government had the excuse not to interfere with the Sikhs who could now go unmolested to Guru-ka-Bagh to cut wood in the jungle. The Sikhs' gain was not confined merely to the immediate point involved. The moral implication of the issue was far more important.

But the Sikh's trials were not ended. For protesting against the deposition of the Sikh Maharaja of Nabha, known for his sympathy with the Akalis and other nationalist elements, the Shiromani Gurdwara Parbandhak Committee was, on October 13, 1923, declared an unlawful organization. Next morcha (front) in this war was Gurdwara Jaito at Nabha.

The above article with thanks to: