Midland Langar Seva Society ("MLSS") has a mission to serve langar every day to people on the streets of the UK and India. This mission was started in 2003 with a desire to help hungry people in the local area. However, the more people they helped, the more this fuelled their desire to help even more. It is this desire to do Seva (selfless service) that has seen us grow and now the society has teams across the UK and even India. Guru Nanak Dev Ji started langar 500 years ago and MLSS simply wanted to bring the concept of service outside of the walls of a Gurudwara to ensure it reaches those who need this support. The feeling of happiness it creates within you is indescribable.

Set up in 2013 by two friends Randhir and Parmjit, who at the time felt as if they had no purpose in life and Parmjit felt the only things to live for were drugs and alcohol. Life was all about clubbing, drinking and enjoying life for themselves only. Nothing else mattered. What changed that was a single occasion where Randhir spotted a homeless man begging for some money. He saw it was someone he knew from school and immediately went to the store and bought him something to eat.

The fire of desire is lit 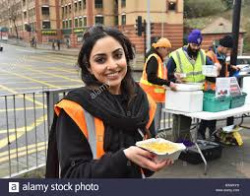 That night he could not sleep and kept having thoughts about this person who he knew, living out on the streets. He had to do something to not only help him, but others who were in the same situation. He knew he had found his purpose in life, and from that moment to now, his thoughts are constantly swamped by ideas of what they could do next to serve the homeless and less fortunate. He managed to convince Parmjit in joining him, which turned his life from someone, who had severe addictions to what he has become today. These men were once known as layabouts, but they have managed to change their lives in such a way that they were then able to help and support many others to do the same.

In just a few months MLSS had spread to other towns, and they didn’t even have to go round and ask anyone to set up a team. People saw and heard about what MLSS were doing and their desire to do seva awakened. MLSS was contacted by those individuals who could see that this was something they wanted to do too. Teams have been set up in 15 other cities including far afield as Plymouth, Blackpool and Preston, and we have also been contacted to set up a team in Berlin which is in progress. 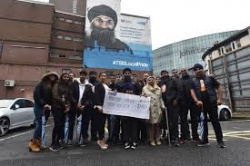 Today MLSS has expanded to operate with over 200 core volunteers across 14 major towns and cities in the UK, feeding on average between 12,000 people per week, support children’s breakfast clubs, leading to countless awards including a recent Pride of Birmingham win.

There is an emerging theme from all the teams which is full of compassion (Daya) and a natural “desire” to help with nothing in return. It wasn’t just evening feeds that were needed as we found out. In Walsall a morning tea and biscuit round is done by volunteers before they start their own day at work, so that service users get a better start to the day too.

This desire to help doesn’t just stop with the adults; we have many young children as young as 4 years old who enjoy volunteering with MLSS as it gives them the opportunity for camaraderie and excitement as they hand out food and gifts to service users. It gives the young children the chance to meet with people from all kinds of backgrounds who come together through a common cause, and also the chance to see that there are people who struggle for a hot meal and we have so many luxuries, we should appreciate what we have. They get have a great sense of accomplishment when they do good for others within their community, giving them a sense of pride and identity.

One of the unique things about MLSS has been that since it was set up it took no monetary donations for the food it served, and this has still been the way it operates to date. All the food that is distributed at street feeds is donated by the generous public. Being a part of the MLSS team makes you feel like an equal partner. You cannot distinguish between the founders and a new volunteer, as everyone is just as important as each other. This is something that both Randhir and Parmjit strive to maintain: no one is seen as a lesser whether it is the team leader, a volunteer or even a service user, and you belong to this family whether you volunteer once a week or once a month.

MLSS may be a charity for the homeless, but there is a lot more that goes on which is unseen by many. There is a lot of time and effort given to people who are suffering from mental health issues, and giving someone your time is something you will never be able to get back.

For e.g. one such person who was spotted by Randhir sitting at a bus stop right next to where the Birmingham feed takes place. He was offered a friendly chat and some food, both of which he readily accepted, and spoke of how he wanted to end his life. He didn’t feel there was any point in continuing as he had lost everything; his family and possessions, and he soon became a regular at the feed. 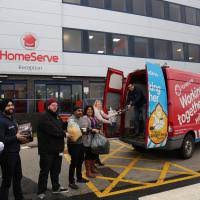 Sevadars working as a team

Another example is the story of John (not his real name), who the Walsall team helped. Bhupinder – Walsall team leader - does a daily “tea run” in the local area where he knows the homeless sleep, and that he is where he met John. Bhupinder saw John on a regular basis in the mornings would stop and have a chat to him and just make him feel like a person who was cared about and not looked down upon. He spoke to him about how he could change his life for the better with a little bit of support, and John listened and took on board what was being said.

He saw Bhupinder each morning and although he very much wanted to move on but his circumstances were proving to be challenging to change. He was living in a hostel and those around him were either drug addicts or alcoholics. Bhupinder saw that John really did want to change and managed to get him an interview with the company Homeserve, and although he said he was very nervous he managed to get the job. However, to be employed he needed a fixed home address, so to help him move from the place he was; Randhir sought a flat and paid for his 1st month’s rent. John is now living in his flat, has a job and has also found himself a partner. MLSS were not just feeding John but became the lifeline that got him back into society where he could now afford to live and feed himself independently. These are just a couple of those they have helped, but there have been many more.

Desire and energy are key components 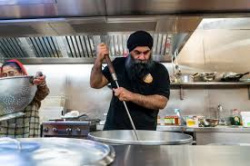 Sevadar focused on the job

Without qualifications both Randhir & Parmjit have qualities of mental health counsellors, and this high level of empathy which they display is filtering down into the teams and individual volunteers too. Everyone is willing to go that extra mile where they can to help and support, even just one person back into work or accommodation, and the motivation to do this appears without much thought when you know what a difference your support will make to that person.

As well as helping the homeless on the streets, MLSS also supports several schools in deprived areas with their breakfast clubs. Milk, bread, juice, and cereal are dropped off weekly to a total of 9 schools. The impact this support has made on the children can be seen in the interview with the teachers by TSB via this link: Local-pride/familykids. MLSS also operates a food bank to support families which has a 24hr emergency parcel drop off; Children Centres and Army Veterans and have recently launched a bus facility to gain access to more remote areas and towns and also provide a more safe and friendly environment to service users.

There is yet more to be done

But it doesn’t stop there either. MLSS provides a whole range of other support including: sleeping bags, blankets, hats, gloves and scarves, toiletries, underwear and this is throughout the year and not just at Christmas time. Support has been provided for pregnant homeless women who have had nothing, but the clothes on their backs. We have managed to get baby equipment and baby clothes as well as signposting them for accommodation.

There have been times when the service users we come across are in such bad health that sleeping rough one more day could be the end of them. At this time MLSS volunteers have dug deep into their own pockets and paid for emergency bed and breakfast shelter for these individuals. It is all about how we can help our fellow human being still be alive tomorrow, and not about what we gain in return.

MLSS hopes to influence everyone so that no one walks past a homeless person without even just saying hello and making them feel like they have a purpose in this world. They are not an inconvenience. Somebody cares for them. 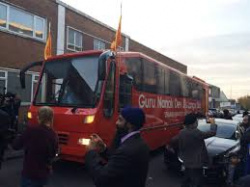 This is another undertaking organised by Midland Langar Seva Society's ("MLSS") mission is to offer a hot nutritious meal to the homeless and vulnerable, regardless of race, religion or background. With the help of many sevadars (volunteers), MLSS is able to provide this humbling seva (selfless service) in cities across the UK. For several years, MLSS and their Sevadars have ensured that the homeless and vulnerable get a nutritious hot meal and snacks on a regular basis. As a charity they say that they are bound by the principles of our first and founding Guru of the Sikh faith, Sri Guru Nanak Dev Ji, who blessed all Sikhs with 3 key pillars to live their lives by:

"As a homeless service provider we are looking at how we can continually improve our services. We are constantly looking at innovation to support our seva (selfless service), and it is with great pleasure that we introduce the Guru Nanak Langar Bus.

This will be a bus dedicated to providing hot nutritious meals to the homeless and vulnerable. The bus will be driven to the locations where the seva (service) is needed.

We have already started raising the money, but still require your support.

If you would like to support this seva (project), then please make your donation, no matter the amount, whatever you feel you comfortabe with - your daswand (portion of your earnings) via this dedicated Virgin Money account.

In addition, you could also use the GNLB as your theme to carry out sponsored events to collect funds for the Guru Nanak Langar bus.

All donations are welcome via the dedicated Virgin Money account.

Thank you in advance for all your support.

If you wish to support this cause, please set up a standing order to one of these accounts (or even both!):

For save in India

For save in the UK