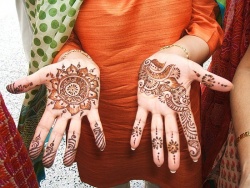 Mehndi applied to the hands

Mehndi (also Mehandi, Mehendi, etc.) is the application of Henna as a temporary form of skin decoration in India, South Asia, Southwest Asia, North Africa and the Horn of Africa, as well as by expatriate communities from these areas. Mehendi decorations became fashionable in the West in the late 1990s, where they are sometimes called henna tattoos.

Henna is typically applied during special occasions like weddings and festivals. It is usually drawn on the palms and feet, where the color will be darkest because the skin contains higher levels of keratin which binds temporarily to lawsone, the colorant of henna. Henna was originally used as a form of decoration mainly for brides.

Henna paste is usually applied on the skin using a plastic cone or a paint brush, but sometimes a small metal-tipped jacquard bottle used for silk painting (a jac bottle) is used. The painted area is then wrapped with tissue, plastic, or medical tape to lock in body heat, creating a more intense colour on the skin. The wrap is worn overnight and then removed. The final colour is reddish brown and can last anywhere from two weeks to several months depending on the type of the paste.