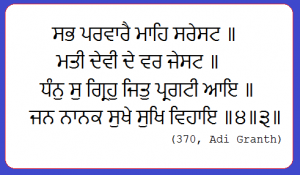 In Sikh Religion, Mati Devi (Pa: ਮਤੀ ਦੇਵੀ) means "The Goddess which gives us Intellect" or Supreme Intellect. It is interpreted as Gurmukhi or Gurmati, the ideology of Parbrahm. In Guru Granth Sahib, Matti Devi is considered as superior then all other existing Devis and it provides supreme boon to Sikh.

Devī (Pa: ਦੇਵੀ) is the Sanskrit word which means "The Giver". The word is used for divine excellence and is not considered as gender specific. As term is feminine, it is ofter represented as female in anthropomorphic narrations. The example of Chandi Di Vaar in Dasam Granth is one of aspect of Mati Devi. Chandi or Durga is treated as topmost intellect among all set of Devis defined in Chandi Charitaras.