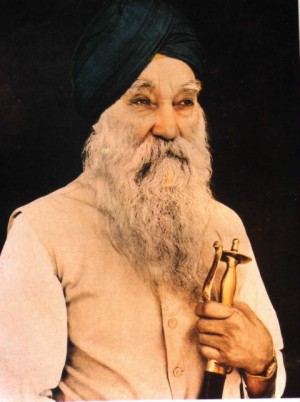 Master Tara Singh, a veteran Akali leader and freedom fighter, was a prominent figure in Sikh politics for more than forty years, was born on 24th June, 1885 in village Haryal, Teh. Gujarkhan, Distt.Rawalpindi now in Pakistan. His earlier name was Nanak Chand. His father Bakshi Gopi Chand was a village patwari and belonged to a Sehajdhari Sikh (Hindu) family. He took Amrit from Sant Attar Singh at the age of sixteen, was renamed Tara Singh and became the first to convert to Sikhism in his family.

His primary education was in the village school and later education in mission school, Rawealpindi.He graduated from Khalsa College, Amritsar. He captained his college Hockey and Football teams and was known as a 'Pathar' (rocklike).

Once the Commander-in-Chief of the Royal Indian Army impressed by the game, offered him a direct commission which he refused as he wanted to be an educationist.

After getting his teacher's training from Govt. Training College, Lahore, he started his career as the Headmaster of Khalsa High School, Layalpur, drawing Rs.15 per month from his pay of Rs.150 and the rest he donated to the school funds.As a student, Master Tara Singh made up his mind to remain poor, and devote his life to the service of his people.Money and position had no allurement for him at any time and his dedication to the Khalsa Panth was unconditional.He was basically a religious man but circumstances involved him in active political life.His truthfulness, honesty, integrity and purity of character always remained above board.

He actively participated in the Sikh Gurdwara Reforms Movement from its very inception, but after the Nankana Sahib tragedy in 1921 wherein more than 200 sikhs were killed, he left his teaching profession and became a whole time public worker. He was the first General Secretary of the Shiromani Gurdwara Parbandhak Committee and later its President for various terms. After the successful end of the Gurdwara Reforms Movement, Master Tara Singh declared, 'Now it is our duty to struggle for the freedom of our biggest gurdwara, our country, from the clutches of British Imperialism.'

He took active part in the Non-cooperation movement in 1930. During this movement the police opened fire on the Pathans (lal kurti) in Peshawar. Master Tara Singh took a jatha of 101 Sikh Satyagraphis from Akal Takht, Amritsar to Peshawar in protest. He was arrested and released after the Gandhi-Irwin pact of 1931. He along with other Akalis remained a member of the Indian National Congress till 1940, with dual membership of Akali Dal and Congress. Later, he continued to participate in the National Freedom Movement as leader of Akali Party.

In 1947, Master Tara Singh and the Akali Dal opposed the formation of Pakistan. He was the first to raise the slogan of 'Pakistan Murdabad', outside Punjab Assembly, Lahore, in the presence of the pro-pakistani crowds. He refused to be tempted by the Muslim League offer of an autonomous Sikh state within the political boundaries of Pakistan.

After Independence, Master TaraSingh raised his demand for the re-demarcation of the boundaries of Punjab on linguistic basis. During this struggle he was arrested in 1949, 1953, 1955 and 1960. He died on 22nd November, 1967 inAmritsar.

from An Article by Rajinder Kaur in Sant Sipahi magazine