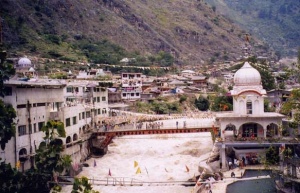 Manikaran, perched on the right bank of the roaring Parvati River, is situated at an altitude of 1760 m and is located about 45 kms, from Kullu, via Bhuntar, in Kullu District of Himachal Pradesh. Manikaran, a place of pilgrimage for Hindus and Sikhs, has many temples and a gurdwara. It has perfect examples of the historic temples of Lord Rama, Krishna, Vishnu (Raghunath) and goddess Bhagwati.

The Ram Temple was built in pyramidal style by Raja Jagat Singh in the 17th century when the idol of Lord Rama was brought from Ayodhya. The idol was later shifted to Kullu. The temple was renovated by Raja Dilip Singh in 1889 AD. A trust is looking after the temple since 1981. The temple complex has three halls and forty rooms for the devotees to stay in. A 'Langar' (free communal food) is also served here. 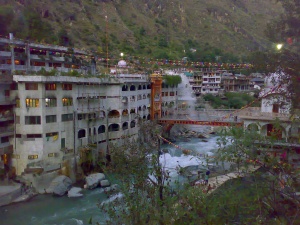 Gurdwara Shri Guru Nanak Dev Ji is an historical sikh shrine present there which was discovered by Baba Narayan Hari, the history of the gurdwara sahib is mentioned in Bhai Bala Janamsakhi and Twarikh Guru Khalsa.

Gurdwara Shri Guru Nanak Dev Ji is located where Sri Guru Nanak Dev ji was with his Sikhs in the Himalaya mountains of India. His sikhs were hungry and there was no food. Guru Nanak sent his Good Friend Bhai Mardana to collect food for langar (the Community Kitchen). Many people donated rice and flour (atta) to make parsadas (bread). The one problem was that there was no fire to cook the food.

Guru Nanak than lifted a rock and a hot spring (hot water) appeared. The Sikhs were able to make rice and beans. Bhai Mardana was having trouble making parasadas (chapatis) because they kept sinking. Bhai Mardana said, "I am going to donate my life in the name of God". The parsada amazingly floated. Guru Nanak Dev Ji said that anyone who donates his life in the name of God, All his (or her) drowned items will float. This was a miracle.

The place is famous for its hot boiling sulphur springs, which are revered by lakhs who come here for a dip in the curing waters. It is believed that the hot springs can cure skin diseases or even ease the swelling caused by gout. A huge Gurdwara has been erected in the memory of Guru Nanak who is believed to have visited this place. A number of Sikh and Hindu pilgrims visit the Gurdwara every year. The Ram Temple mentioned above, built in the 16th century, is situated near the Gurdwara.

Langar cooked in the hot springs 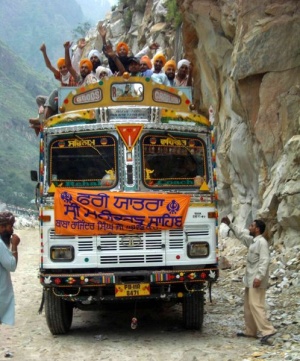 The village 'shatt' is on the way where once a cloudburst had turned the village into a nullah. An awe-inspiring experiment at Manikaran is that of cooking rice or dal in the boiling hot waters. Tourists can experience this by purchasing 'chawal potli' (rice in a muslin bag) from the nearby market. The gurdwara management prepares tea and food by putting huge vessels in the water. There is a water pool in the gurdwara where one can enjoy a hot bath. The local residents use hot water in narrow bazaar through pipes.

Tibetans dominate the market here where one can buy religious idols, offerings, books, prasad, and Tibetan products. The amazing union of cold water and boiling springs in Parvati river has mystified many a scientist and the devout alike. Nature has used an array of colours, textures and materials to form fascinating mountains with many medicinal herbs. Transparent stone crystals, which resemble topaz, can be found at some points.

Water flowing through the curves of hill land shapes has given rise to driftwood in various shapes and forms. Due to the climate, local vegetables and pulses like rajmah and urad are of rare quality and taste different from those available in the plains.

A number of breathtaking places can be part of the expedition to Manikaran. Pulga, 16 km on left bank of the river, is a stiff march with a challenging climb of 1600 m. Khirganga is also famous for its hot springs containing medicinal properties. Pandapul has an ancient heritage. Two kilometres ahead, Mantala is another enchanting place.

Chandra khannipass, which can be reached after stiff climbing, looks like a flower paradise in season. There is no end to nature's captivating places around Manikaran. Besides a comfortable stay in the premises of the Gurdwara and private guest houses, the Himachal Pradesh Tourism runs Hotel Parvati on the banks of the river. You can also have a sulphur bath in the attached bathroom of the hotel.

Manikaran is located 35 km from Bhuntar, near Kullu. Legend has it that once Lord Shiva and his divine consort Parvati were wandering in this sublime environment. Shiva liked the place and started meditating. Meanwhile, Parvati started taking a bath in the blue waters. While she was playing in the water she lost a jewel from her ear ring her earring. Shiva was enraged when he could not get find the jewel in the water and started doing Tandav, his dance of destruction. The atmosphere grew tense and Shiva threatened a large serpent swimming in the swirling waters as he figured he had stolen the beautiful jewel from Parvati's ear ring. (As you may know serpents and dragons are often depicted in Tibetan art holding a jewel in their mouth.) However the serpent gladly fished the jewel out from the waters. Thus the river came to be known as Parvati and the place was called Mani (jewel) Karan (ear). 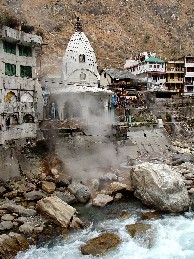 In another version the mountain - locked area, the lush green patches and the forests of Mani Karan charmed Lord Siva and Goddess Parvati so they decided to stay there for sometime. For long eleven hundred years they remained at this place. At one time, when the Lord was relaxing with the Goddess, in the beautiful waters of a stream running by the side, the 'Mani' (Jewel) in an ear-ring of the goddess dropped somewhere. Parvati was much distressed and there was a thorough search but efforts to find out the jewel failed. Lord Siva got enraged, as a result of which his third eye opened. With the opening of the third eye of the Lord Siva, a very ominous event, there was a great commotion, all over the universe. In order to subside the anger of Lord Shiva, Shesh Nag hissed and hissed, as a result, there was a flow of boiling water continuously, which passed over the area and out came a large number of the precious stones.

There are several temples in the Mani Karan village. The most important is that of Lord Ramchandra. The Pandas or priests of the village claim that the idol of Rama was brought from Ayodhya and installed in this temple by the Raja of Kulu but this lacks a historic confirmation. There was also an idol of Lakshman the younger brother of Lord Rama Chandra, which has now disappeared. On the left hand side of the Lord is the idol of Goddess Sita. The temple is very old and on one of the stones in its wall, the history of the temple is written which is not legible.

Temple of Lord Shiva: There is another very old temple of Lord Shiva, which got tilted during the earthquake of 1905. The great prestige with which Manikaran is held is seen by the fact that the Devatas of Kulu valley pay regular visits to Manikaran. The followers of the individual deities at different places are carried ceremoniously in a procession to Manikaran on specified auspicious days.

By taking bath here and by drinking water of this place, people go to Heaven, this is said of the Manikaran tract since the times immemorial. It is just like 'Kashi Kshetra' and there is no doubt about it. On examination it is understood that the Manikaran hot spring is said to have got Uranium and other radio active minerals.

On the northern side, there is a mountain, which is named as Harinder. Merely a look at this mountain will make a person free from all evils and on the south is the Parvati River.

Out of all sectors 'Piths' of the country, this sector, which is called 'Kulant Pith', is the superior most. Here, the most sacred place of pilgrimage is Manikaran, and in it the 'Vishnu Kund' is the purest of all. Lord Shankara was mightily pleased to stay here and this is absolutely true. No other tank in the world, could be more pure than these high rising tanks. Even a drop of water from the tanks will make one free of all evils. Narad, on account of the influence of the Shankara's eye, said that this sacred place, causes the disappearance of anger and evils. One who eats the food cooked in this boiling water goes to the Vishnu Lok.

How To Get There 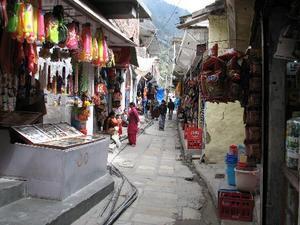