The local tradition which was authenticated by the S.G.P.C. holds that the sixth Sikh Guru Shri Guru Hargobind Sahib stayed for two months during 1646, at the bank of a big sarovar known as ‘ Barhi Dhab’. He was accompanied by his followers and warriors. A skirmish occured between Guru Sahib`s men and a contingent of the Mughal forces. In the clash, the weapons of Guru Sahib’s men got damaged. His men pleaded before Guru Sahib that not even a tiny tissue of steel was available in the area for the repair of their weapons, how could they fight further.

Guru sahib smilingly said “ Some day this place will be a big steel producing centre in the country, where you say, no steel is available for repair of your weapons”.A magnificent Gurdwara in the holy memory of the Guru Hargobind Sahib is situated near the railway station. The place known as ‘ Barhi Dhab’ then became known as Gobindgarh after the name of Guru Hargobind ji.

The sagacious Maharaja Hira Singh of Nabha in whose territory Gobindgarh then lay, sowed the seeds of industry by starting some industrial units in this town in 1902. This lead was followed by Maharaja Partap Singh who took some special measures for the industrial development of the town. Accordingly, Gobindgarh was declared a free trade zone for steel in 1928. Thereafter it began to make tremendous progress in steel business. Land was made available to local blacksmiths at nominal rates in early 1940. This move led to establishment of a number of workshops on both sides of the G.T.Road at Gobindgarh. This was the nascent stage of development of the ‘ steel town’.

This town is a Sub-Tehsil of Distt. Fatehgarh Sahib, which is also known as the Steel Town of India and is having a large number of steel rolling mills. Nearly 200 rolling mills are serving 25% of the secondary steel market of the country. There are about 48 Induction Furnaces producing raw material for the rolling mills. There are about 12 forging units catering to the needs of steel rolling mills, sugar and paper industry. There are 40 foundry units, 90 scrap cutting units and 12 oxygen plants catering the local requirements of the industry. Besides, there are another 67 units associated with the main industry.Today, Gobindgarh is home to many educational and vocationals institutions run by philanthropists and big industrial houses of the township. 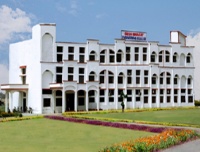