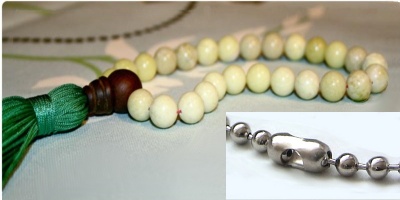 Mala or mala (Sanskrit:माला; mālā, meaning garland) is a set of beads commonly used by Hindus, Buddhists and certain promoted in certain Sects of Sikhism. It is also known as Simranee, prayer beads or Rosaries. Members of various religions such as Islam, Roman Catholicism, Orthodox Christianity and Bahá'í also use Mala to count the repetitions of mantras (sacred phrases), Shabads (prayers or hymns), chants or devotions.

Gurmat is not promoting use of Mala though few Sikh sects claim counting mantra using Mala. These sects often depicts founder of the Sikh religion, Guru Nanak Dev Ji, with the mala in his hand.

In Gurbani, Mala is used by Pundits and Vaishno, along with Dhoti and Tika. 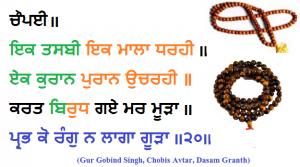 In Dasam granth, Guru Gobind Singh is not seen carrying Mala and nowhere is he promoting using of Mala. In commencement of Chaubis Avtar, He had a jibe on Mala Carrying Hindus and Muslims by saying which means that with even mala no one can dyed in love with lord.

A mala is a set of beads strung on a thread usually made from 108 beads, though other numbers, usually divisible by 9, are also used. Although, traditional Sikhs generally use a Mala with 108 beads in keeping with the earlier Hindu tradition, in Sikhi, this number is not written in stone.

Smaller numbers are now becoming more popular as these are easier to carry in the pocket and more in-line with the western life-style. Sikhs also use prayer string made of wool with 99 knots rather than beads.

Malas are used for keeping count while reciting, chanting, or mentally repeating a mantra or the name or names of a the Lord, such as Waheguru or Satnam, etc. This practice is known in Sanskrit as "japp" and Sikhs refer to it as "Naam jaapna". In Sikhism, the mala may also be used for keeping count of the number of repetitions of Shabads or to aid in concentration, or for general meditation, etc.

Although all the beads are the same size, there is always one bead on a mala which is called the sumeru, bindu, stupa, or guru bead which is usually bigger or otherwise unique. Counting should always begin with a bead next to the sumeru. Each time the reciter passes the sumeru, one cycle of the mala is completed.

Since the beads are fingered in an automatic manner, they allow the user to keep track of how many prayers have been said with a minimal amount of conscious effort, which in turn allows greater attention to be paid to the prayers themselves.

The number of beads also vary depending on the different religions, Islamic prayer beads "Tesbih", "Tasbih" or "Misbaha" usually have either 99 or 33 beads. Buddhists and Hindu Brahmanists use "Japa Mala" usually with 27 bead malas, a divisor of 108, whereas Baha'i Prayer beads consist of either 95 beads or 19 beads strung with the addition of five beads below. Sikhs use a Mala with 108 beads. Greek "komboloi" has an odd number of beads usually one more than a multiple of four, e.g. (4x4)+1, (5x4)+1. Roman Catholics use the "Rosary" (Latin "rosarium", meaning "rose garden") with 54 with an additional five beads whereas Eastern Orthodox Christians use the "Rosary" with 100 knots, although "prayer ropes" with 50 or 33 knots can also be used.